The long-dormant franchise is being reborn, and a new game has been announced on Steam while an old classic is currently free.

Kao the Kangaroo, a PS2-era mascot platformer series, is making a comeback. The series, which has been dormant since 2005's Kao: Mystery of Volcano, is returning for a new adventure. The games, which were 3D platformers released in the early 2000s, might not be the most fondly-remembered titles of the time, but with 3D platformers being much less common these days there's perhaps reason for people to be nostalgic for Kao.

The game has been announced on Steam, and while details are thin, this confirms that the game will come to PC. "This time Kao will take on a completely new journey," the announcement reads. "New story, challenges, enemies, visuals, and a whole lot more! We will keep you posted and soon you will be able to see a first glance of the game."

The game is in the works at Tate Interactive, which also developed Kao The Kangaroo: Round 2, Kao Challenges, and Mystery of Volcano. The second game in the series is also currently free on Steam, alongside several other games across various platforms.

Kao is not the only Australian animal to have worked as a platformer star on the PS2 before being revived--Ty the Tasmanian Tiger HD released for the Switch earlier this year. While Tate Interactive is a Polish company, Ty was developed by Krome Studios, based in Australia.

Hopefully we'll have more news about what the new Kao will look like soon, and whether it'll be aimed at older fans or new young players. 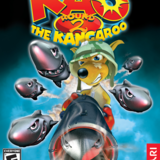