Blast Entertainment to publish game based on the hit TV comedy series.

"Computer says yes" for cult comedy Little Britain--a game version of the British sketch comedy show will be coming to the PlayStation 2 and PC in January 2007, with a PSP version following shortly afterward.

The game will simulate an episode of the BBC show, with gamers having to complete minigame challenges to move on to the next skit and ultimately the end credits. The eight minigames feature Little Britain characters Lou and Andy, chav Vicky Pollard, Mr. Mann, transvestites Emily and Florence, fat fighter Marjorie Dawes, Daffyd Thomas (the "only gay in the village"), Judy and Maggie, and Letty.

The characters have been modelled in 3D and animated by hand, and voices for the game will be provided by the creators and main stars of the show, Matt Lucas and David Walliams. The pair have been recording the voices this week, a Blast spokesperson told GameSpot, and Walliams has also been working on the game's script.

Little Britain was previously a radio series before debuting on BBC Three in 2003. There have been three seasons of the show so far, and there will be a tour of Australia in 2007. A fourth series is also planned for autumn 2007, and an American version on HBO is in the works. 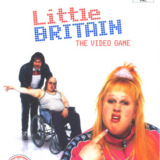