Heroes of Might and Magic V: Tribes of the East Hands-On

The orcs and their bastion allies are the center of this stand-alone expansion for Heroes of Might and Magic V.

Ubisoft and developer Nival Interactive will look to wrap up the Heroes of Might and Magic V saga with the release of the second expansion pack to last year's turn-based fantasy strategy game. Heroes of Might and Magic V: Tribes of the East, a stand-alone expansion that will not require you to own the original game, will let you explore a magical world with an army composed of heroes and fantasy units--only this time, you'll finally get a chance to play from the perspective of the brutish orcs.

The orcs actually are part of the new bastion faction, which includes other races such as goblins, centaurs, Cyclopes, and wyverns. According to Might and Magic history, the orcs were created to battle demons, and they, along with the other bastion races, were enslaved by their masters afterward. The story for Tribes of the East is that an orc hero named Quroq emerges to lead the bastion tribes out of captivity and to a new home, and if he has to wipe out everyone in his path to do so, so be it.

In the level that we played, Quroq has to go about liberating the various tribes in the Raven Duchy of the Griffin Empire. We didn't get a chance to see any bastion towns in the level, but there was still plenty to see and do on the world map. There are numerous encounters to be had, from battling various guardians protecting key structures or treasure hordes on the map to exploring various forks in the road and areas off the beaten path. You can burn and pillage farmsteads for experience points or gold, head to a temple or shrine for a buff or temporary bonus before a battle, recruit mercenaries at a camp, and more. Early on we encountered goblins slaving away under the watchful eyes of some peasants. You'll start with a handful of units, which you can use to defeat the peasants (they're really easy), and thus free the goblins. A large number of goblins will join your army, and you can recruit more at the goblin structure on the map. We also managed to free centaurs and Cyclopes from similar captivity, and those units joined our army, replenishing losses from each battle.

The turn-based combat system hasn't changed much, if at all, from Heroes of Might and Magic V. You can still arrange your units' starting positions on the grid before a battle, and once the action starts each unit moves in turn, with the unit order listed on a bar below. Heroes remain on the sidelines, though they can attack, cast spells, or use special abilities during their turn. While turn-based, battles are still very tense as you face tough opponents. We took hordes of weak skeletons and goblins into battle against knights, archers, and griffins, and we barely won. (A word of note: If you face griffins, focus on them immediately, because they can dash around the battlefield and decimate even large groups of weak units in a single blow.)

A key thing to keep in mind about the orcs is that they operate on the principle of blood rage. Orcs like to be on the attack. This means that they're happiest when battling the enemy. This is reflected mainly in their attack values. As long as a unit is attacking, its blood rage builds and its attack value increases over the fight. However, if the unit sits still for a round (perhaps you want the enemy to come to you), the blood rage cools and the attack value might dip. The orc heroes can aid in this with their blood rage spells, as they can temporarily boost the blood rage in various units, provided they have enough mana to cast the spell. We saw one orc unit go from an attack rating of 10 to 25 with blood rage cast on it.

Then there are sacrificial pits, which is a new feature in Tribes of the East. If you've played Heroes of Might and Magic, you know that you can often get hordes of weak, obsolete units in your army. These include peasants, skeletons, and anything else that comes in groups of hundreds. While they can be used for canon fodder on the battlefield, that's about all they're good for. No more. In Tribes of the East, if you need to generate some experience points in a hurry to level up a hero, or if you need a slight buff for your units before a big battle, head to a sacrificial pit and offer up your obsolete units. They'll die, but you'll get an experience-point boost as well as a temporary luck boost.

Tribes of the East will also introduce armor and weapon sets, which operate not unlike those found in many games, such as Diablo. There are various magical weapons and pieces of equipment, but if you manage to find all the pieces of a complete set, they become even more potent. For instance, the ogre club is a mighty weapon in its own right, and the ogre shield provides powerful defense. Equip both of them on a single hero and they unlock new powers and abilities. Armor and weapon sets should provide incentive to explore each and every corner of the map thoroughly. 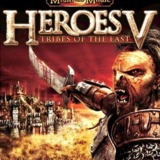 View Comments (28)
Heroes of Might and Magic V: Tribes of the East