We take a brief look at a new build of THQ and Anchor's upcoming Xbox wrestling game.

THQ sent over the latest build of its upcoming Xbox wrestling game, WWF Raw, and we had the chance to play through a few different modes and get a general feel for the gameplay. The game begins with an FMV intro from the WWF Raw TV show but then cuts into the real-time depiction of an arena along with a spectacular pyrotechnics display. After the intro, we jumped into the exhibition mode and selected a basic one-on-one match that lets you select a wrestler and a manager. Like Smackdown!: Just Bring It, the roster in WWF Raw appears to include wrestlers just before the WCW/ECW invasion angle took place, so the most recent additions you'll see to the WWF roster are wrestlers like Tajiri, Justin Credible, Haku, and Rhyno. Of course, you'll also find popular WWF wrestlers such as The Rock, Stone Cold Steve Austin, The Undertaker, and Chris Jericho. All of the wrestlers look incredibly detailed and, with a few exceptions, generally look like accurate representations of their real-life counterparts.

The one-on-one exhibition match begins with real-time introductions of the wrestlers, which have been faithfully re-created down to even the smallest mannerism. For example, the Big Show will duck underneath the WWF.com sign before making his way to the ramp, Triple H actually spits out water when he stands on the ring apron, and The Rock even makes his trademark overexaggerated head movements while on the turnbuckle. When a wrestler makes it to the ring after an introduction, he'll have the option to interfere in another wrestler's introduction. If you decide to interfere, your wrestler will automatically run up the ramp and ambush the other wrestler--in a multiwrestler match, the other wrestlers will then run out and join in the fray.

When the match begins, you'll immediately notice that the gameplay is much slower and more deliberate than the gameplay in the Smackdown! series but not quite as slow as in No Mercy. Wrestlers can do all of the basic punches and kicks as well as various lunging maneuvers--such as a flying clothesline--while in the basic standing position. You can also make them block to prevent their opponents' punches or kicks from successfully connecting. Grappling is simply performed by pressing the corresponding button when you're in close enough proximity to another wrestler, but if you're not in close enough range, then you're left open to a possible counterattack. The length of time you press the button doesn't appear to have any effect on the impact or complexity of the move you can execute. While in the collar-and-elbow tie-up, moves are incredibly easy to execute because they only involve basic D-pad (or analog stick) and button combinations, and you can even perform a go-around to do suplexes and similar maneuvers or throw an opponent into the ropes. However, if you don't execute a move promptly or if the other wrestler attempted a grapple at the same time you did, then the opponent will push you away. When an opponent is on the ground, you can execute a number of different moves ranging from boot stomps to submission holds, depending on where you're standing.

The camera generally stays in an overhead perspective during the match, but it will switch to a more dramatic angle when certain types of moves are executed. There's also an instant replay feature that mimics the television shows by dividing the screen into two sections, one showing the live action and the other showing the replay of the move.

At the bottom of the screen, there's a large color-coded bar--named the voltage meter--with small icons indicating which section of the bar belongs to a particular wrestler. As you perform different moves, your section of the bar grows, showing the shift in momentum. Additionally, there's a smaller bar located underneath each wrestler, that coincides with a wrestler's stamina--when the meter drops, the wrestler can't execute a succession of moves and they'll even take a moment to catch a breath if pushed too hard. When an opponent's stamina is virtually nonexistent, it's a perfect opportunity to execute a special move and then go right for the pin. After winning a match, your wreslters starts a traditional celebratory sequences.

After the one-on-one match, we tried a battle royal match, which pits four wrestlers against each other. One of the participants in the match was The Undertaker, who comes to the ring wearing a bandanna and sunglasses. During the course of the match, you can actually knock these items off of the Undertaker's face, pick them up, and then put them on your wrestler's face. Needless to say, it's pretty funny to see wrestlers like Kane or Stone Cold sporting Undertaker's sunglasses and bandanna. You can also find these types of items and others (like a foam hand and a television) just lying around ringside.

There are a number of other modes to select from in WWF Raw including a fatal four-way, handicap matches, a triple-threat match, as well as a king-of-the-ring-style tournament and a championship mode where you must defeat a series of wrestlers to become champion. Unfortunately, a traditional story mode and some of the more creative matches (like ladder and steel-cage matches) are nowhere to be found at the moment, though keep in mind that we've only been able to spend a short amount of time with the game. We'll have an in-depth preview of WWF Raw's features and gameplay soon. 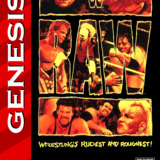