Take a look at detailed technical and background information on the AWGS mechs you'll be using in the upcoming Xbox-exclusive mech sequel.

Comments
The AWGS (Armored Walking Gun System) is a weapon that first appeared on the battlefield during the previous Great War. At first it was deployed in place of the tank, but it soon gained enough recognition to be accepted as the primary weapon of the era. However, with the introduction of the Type 12 Armored Walking Tank "HIGH-MACS," the situation changed entirely. The applications of this machine, with which 3D movement was possible, sharply deviated from those of earlier AWGS models, and it changed the fundamentals of land-based warfare. After the previous Great War, the second-generation AWGS, which combined the tremendous firepower of a tank with the maneuverability of a battle helicopter, was soon deployed by militaries worldwide. It has since become the unrivaled ultimate weapon in land-based warfare.

There are basic differences between units, in terms of speed, armor, features, usable weapons, and so on, but each unit falls into either the two-legged or the four-legged category.

Weapon Outfit Variations: four-legged type: all weapons are fixed (It is possible to choose between unit variations.) two-legged type: all types can exchange weapons except JAGD Panther and variants


An AWGS developed cooperatively by America and Japan. Completed in 2012 AD, it is the first second-generation AWGS, and the first capable of 3D movement. It brought about a revolution in land-based warfare. A highly reliable unit with a good balance between maneuverability and attack power, it is employed as the main force within the Mobile Battle Tank Unit.

An AWGS covered in spaced armor that is created by welding aluminum to the entire body. Since there are a variety of armaments at its disposal, there is no set equipment. It was originally developed by America, but Japan obtained the construction rights and independently modified and mass-produced the design.


A multilegged AWGS that has earned the nickname "Brutal Crab." The M-19 was modified by improving the armament and armor of the M-15 Land Crab, which was developed by America according to the concept of a firing platform with the ability to travel over rough terrain. The M-19 A-1 Brutal Crab has also been outfitted with combat tires, and it is capable of a rolling dash.

A four-legged heavy AWGS developed by Britain and South Africa. As a fully weatherproof, all-terrain unit, the Mammoth is capable of penetrating deep into the heart of enemy territory. It is highly reliable and versatile enough to be effective in all types of missions, ranging from scouting operations to all-out assaults. Since it is primarily applied in Africa for long solo missions, there is plenty of storage space for fuel, water, and food reserves.


A second-generation AWGS developed by Germany in 2015 AD using the same concept as HIGH-MACS. Gatling gun pods mounted on the wing stubs are its primary weapon.

The AWGS mechs are equipped with a bevy of state-of-the-art weapon systems.


This will be your primary weapon for shooting and destroying enemies. An excellent weapon improved for the AWGS. It has high destructive power, but the available ammunition is limited.

A submachine gun mounted on the body of your AWGS. You can fire without having to worry about how much ammunition you have used. But be careful, because if it overheats it will stop firing temporarily.


You can deal tremendous damage with a direct rocket hit, as well as mow down enemies within a set blast radius.

This missile will head for the enemy that you have locked onto with the crosshairs. There are two types: The automatically guided infrared type (IR), and the manually guided optical type (OP). 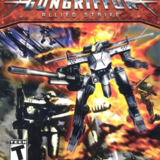