We sling lead at everything from bandits to bears in Gun Showdown, the handheld version of Activision's Wild West action adventure game.

We recently had a chance to strap on a pair of six-irons for a trip to the Wild West in the upcoming action adventure game Gun Showdown for the PlayStation Portable. We played through a couple of story missions, slung lead in the quickplay scenarios, and blasted some rival bandits in deathmatch mode. Based on what we played of the game, it looks like Gun Showdown is taking a dead aim on bringing all the gritty action of last year's Gun to the PSP, along with content you haven't seen before.

As you might have learned in our recent preview of the game, Gun Showdown is more than a simple port of last year's Gun. In addition to the complete previous game, Showdown has five added missions, a quickplay mode, and multiplayer game modes.

We started off by trying out the multiplayer game, which lets up to six players go at it via an ad hoc connection. There are three multiplayer modes in the game: a straightforward, kill-anything-that-moves deathmatch mode, a capture-the-flag-style golden cross mode, and a poker game. We tested our trigger speed in a deathmatch game against a group of bots. There are eight maps in the game, and we played two of them. The first map was a town map taken from the single-player game and adapted to multiplayer. There were buildings to enter, balconies to snipe from, and a courtyard for some intense shoot-outs. You can adjust the skill level of the bots in the game, but even with the bots on the easy setting, we were getting capped fairly frequently. The second map we played was set in an underground cavern filled with massive deposits of shimmering gold. The maps we played were both of decent size, but they weren't so massive that we ever had to go searching for a fight.

Playing a few rounds of deathmatch was certainly a good way to get accustomed to the control scheme in Gun Showdown. The game has been adapted to the PSP in several ways. For one, the aspect ratio is 16:9, which gives you a wide view of your surroundings, with Colton, the game's enigmatic hero, standing a bit off to the left, giving you a good view over his right shoulder. You move Colton using the analog stick and use the four face buttons to aim. We found this control scheme to work fairly well not only for aiming, but also for getting a good look at the lay of the land. There is a targeting-assist feature that will gently lock your aim onto enemies, but it's not a hard lock, so you can still aim freely if you want to go for a headshot or take out an enemy's leg with a well-placed round.

After getting wasted by the bots in deathmatch and getting accustomed to the control scheme, we tried a couple of missions from the story mode. The first mission we played was Ambush the Train, which you may remember from the original game. We started atop Colton's trusty steed, Rouge. First, we had to get to a tunnel and pick up barrels of dynamite from a nearby cart to place in the tunnel. Before we got the trap set, we had to take off across the badlands on horseback to defend an ally against a bunch of no-good bandits. After fending off a few waves of attackers, the train began to move, so we once again had to hop on Rogue and take off across the desert to where we had planted the dynamite in the tunnel. We had to place one last keg of explosives, then run up to the top of a ledge and snipe the barrel before the train went through the tunnel. It took a few attempts to get it down, but once we did, we saw a cutscene where the tunnel collapsed, stopping the train. The mission took less than 10 minutes to complete, which should make the game well suited for gaming on the go.

The second mission we played was called Bank Job, a new mission added for Gun Showdown. In this mission, we joined up with two fellow bandits to rob a bank. It was our job to defend one of the bandits, Soapy, as he cracked the safe in the basement of the bank. Waves of attackers approached, but we easily cut them down using Colton's adrenaline effect. This is activated by pressing up on the D pad, which makes time move slowly so you can easily pick off enemies. After we fended off about a dozen attackers, Soapy finally cracked the safe and another outlaw grabbed the gold to carry out of the bank. We were then tasked with fending off attackers so our fellow bandit could load the gold onto a nearby coach. We moved out into a courtyard and had to fend off snipers from positions on nearby balconies. It was an intense shoot-out, but once the gold was loaded up, we called Rogue and followed the coach to get the heck out of Dodge. Of course, robbing a bank couldn't be that easy, and on the road out of town, the coach was ambushed multiple times, so it was up to us to fend off attackers and protect the gold. This mission was fairly long and multistaged, with several objectives that needed to be met.

By this time, we were used to the controls and able to pull off headshots left and right without much difficulty. We then put our skills to the test with a few quickplay games. These are simple minigames that you can play for a few minutes at a time if you just want to get a quick shooting fix. The first one we played was called Suppress the Outlaws and again took place in a town setting where we had to kill wave after wave of attackers. You get one point for each attacker you kill and 10 points for capturing an attacker and dragging him back to a highlighted spot on the map. It's an interesting and challenging game that could be a good way to hone your skills for when you take on your friends in the multiplayer game. The second minigame we played was simply called Bear Hunt, and it had us, well, hunting bears. We started off in a small forest camp, and one by one, bears began to attack. These weren't cubs, either; they were huge brown bears and black bears that were easily several times larger than Colton. Luckily, we had a shotgun on us and were able to cut through about a dozen brown bears in no time. However, at that point some tougher black bears began to show up, and instead of coming one at a time, they began to come in waves. On our first try, we were only able to bag 17 bears before we were mauled to death. The bear-hunting minigame was much simpler than the Suppress the Outlaws game, but it was still fun in a pick-up-and-play sort of way.

Gun Showdown looks good on the PSP screen, particularly because the sharp, wide-screen format gives the appearance of a classic Western movie, with sweeping views of desert wastelands, treacherous canyons, and dusty frontier towns. The characters and environments all look detailed and colorful, and the frame rate seemed to keep pace fairly well. One issue the development team has been trying to address is the problem of load times on the PSP. They seem to have been successful, because we noticed very few load times, and the ones we did encounter were brief. One part of the presentation we liked in particular was the dramatic orchestrated soundtrack that really brought a sense of tension and adventure to the action. The voice acting all sounds good, as well, and you'll hear some funny taunts and derisions from enemies as you fill them full of lead.

If you played and enjoyed Gun last year, or if you just have a thing for Westerns, you'll want to keep an eye out for Gun Showdown. The new content looks like it could be fun for gaming on the go, while the single-player story mode and multiplayer modes will keep you coming back for awhile. We'll bring you more details in our full review of Gun Showdown, so check back here often as the game's October 10 release date approaches. 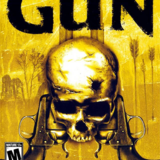