See a gameplay trailer and check out some images for the intriguing-looking indie game right now.

Mekazoo, a new indie game that its developer The Good Mood Creators calls a "throwback 2D platformer," is coming to consoles and PC in the back half of the year. The Seattle-based developer has announced that the game will be available for PC, Xbox One, PlayStation 4, and Wii U sometime between October and December.

New to Mekazoo? It's an intriguing-looking game where players control up to five "mekanimals," which are essentially mechanised animals. There's an armadillo, frog, wallaby, panda, and pelican, and each has it own unique skills and drawbacks.

The Good Mood Creators say their goal was to create "flee-flowing speedy gameplay", which you can see for yourself in the gameplay trailer above. Watch as the mekanimals swing and boost themselves around a series of imaginative and colorful environments. The game also boasts a "dynamic camera" that changes on the fly based upon player movement.

In terms of story, Mekazoo opens with the armadillo character waking up to learn that his animal friends have been morphed into machines bosses. After defeating these bosses, the characters return to their normal selves, becoming unlocked as playable characters.

Creative director Jarrett Slavin said Mekazoo was inspired by platforming classics such as Super Mario World and Donkey Kong Country. Watch the trailer above and it's not hard to see that's true. “We are combining all the lessons learned from those masterpieces and the innovative ideas we've spent decades brainstorming to deliver the game we wish existed since we were kids."

For a closer look at Mekazoo, check out the image gallery below. 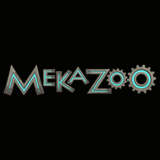