Aside from Goemon himself, the game stars three familiar characters from the Goemon universe: Ebisumaru, a gaseous ninja with a ravenous appetite for dumplings; Sasuke, a clockwork ninja with an internal villain/altruist switch (kind of like the evil Krusty doll from The Simpsons); and Yae, a beautiful female ninja with the power to transform into a mermaid.

Each character has an impressive array of projectile, charging, and weapons attacks, but the damage these attacks cause pales in comparison to the carnage you can inflict by "piggybacking" on a prone pal. While locked in this laughable embrace, one player steers while the other attacks. You can even unleash powerful new subweapons.

Upon entering a town, you may visit a teahouse to swap characters, a general store to replenish supplies, an inn where you can rest, or a fortune teller from whom you can obtain secret info. You'll also meet plenty of oddball characters, who may offer you side quests.

While its distinctly Japanese graphics and humor will undoubtedly turn off many casual gamers, fans of innovative play mechanics and classic platforming action will find Konami's latest offering to be one adventure well worth taking. 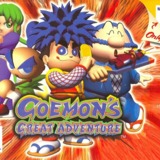