Comments
Genki, developer of Tokyo Xtreme Racing, has announced that it will release a PlayStation 2 port of its latest arcade racing game Wangun Midnight. The game is based on a Japanese comic series and was released in the arcades last fall in Japan. The port will also feature its own scenario mode and supports multiplayer games via the use of I-Link cables. Wangun Midnight for the PlayStation 2 is expected for a March release in Japan. It will retail for 6800 yen in that country. 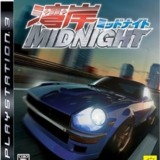