Sony Online Entertainment's free-to-play massively multiplayer online game will attempt to shake up the genre's staid conventions--but you didn't hear that from us.

After you read this preview, don't expect to hear much more about Free Realms on the pages of GameSpot. Sony Online Entertainment is doing a lot of things differently with its upcoming freely distributed and free-to-play massively multiplayer online game. For starters, SOE plans to market the game solely through viral methods; it will probably do things like seed message boards and allow word of mouth to spread. So we're not expecting to even see the game again before it releases on the Internet, much less obtain any screenshots or videos to show you.

Luckily, we're glad to write about it anyway, because Free Realms sounds rather interesting. The game is being created primarily for the PC, with a PlayStation 3 version planned as well. It's also being created so that people with computers of all shapes and sizes will be able to run it. That means you shouldn't expect the game to push any graphical boundaries like most retail MMO games do. But on the flipside, Free Realms will purportedly be quite compact because you'll be able to download the game client, as well as get up and running within the gameworld itself, in a matter of moments. Rather than installing the entire game to your hard drive, you'll also be able to download new components piecemeal as you move around the gameworld.

What we got to see of the game itself looked fairly promising. SOE says it's targeting both male and female gamers from a wider range of ages than it has with past MMO games. To that end, the company is crafting a lighthearted, whimsical sort of world in which your adventuring will take place. No details were revealed about the lore behind the gameworld, but it looked like a cartoonish, vaguely medieval setting with some real-world elements, such as what appeared to be a Halloween celebration. Again, this isn't the most graphically complex game you've ever seen, but it seems to be taking the World of Warcraft track, with colorful and varied art design making up for any technical shortcomings.

On the gameplay side, SOE is doing a lot of things differently than it would with a typical MMO game. For one thing, there will be no player classes. Combat will also be optional. Despite these two omissions, the designers promise there will still be "meaningful character progression." You'll find plenty of quests to undertake, but they just won't all involve fighting. For instance, you might have to sit down and win a game of chess in the town tavern to complete a quest objective. Or you might stumble on a soccer field in the middle of a forest and simply decide to play a pick-up game if you like. From the sound of it, Free Realms will encourage you to engage in any and all of the activities you're interested in, while allowing you to ignore the ones you aren't.

So how is SOE going to support all this? As mentioned, the initial game client will be free for anyone to download and play. Development and support of the game will be subsidized by banner ads that are said to appear outside of the game window itself, though players will be able to pay a small subscription fee to remove ads. Some product placement may also be a possibility, but SOE wouldn't say how this sort of advertising might appear in-game. Lastly, there will be some opportunity for microtransactions for advanced players: You'll be able to drop a little coin for special items that aren't available to the freebie players. But again, company reps couldn't provide more details on such small transactions at this point.

Free Realms is looking like an interesting experiment in alternative game design and distribution. From the looks of things, it might amount to quite an entertaining time as well. We're not really sure what SOE's viral marketing campaign will entail, so we can't say just yet where you should look for more information. So for now, if you want to know more, just keep your ears to the ground. 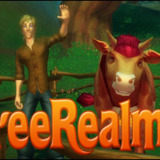