Justin Calvert role-plays in tower defense and plays Pac-Man with portals in this week's look at games that you can play for zero dollars.

Do you have a PlayStation Vita? Did you pick up LittleBigPlanet for it already? If so, why haven't you played my level?! At the time of writing, only nine people have played, and as a result, I've had to resort to shamelessly plugging it here when I should be writing something about this week's selection of games and demos that you can play for free. No codes again this week, but more giveaways are coming soon, and I hope you'll agree that this week's games are plenty fun enough without the added thrill of getting to enter a code beforehand.

Given the countless hours that I've spent playing games like Plants vs. Zombies and Kingdom Rush (free on iOS this weekend and definitely worth a download), I think it's fair to say that I'm a fan of tower defense games. I've also been known to lose myself in role-playing games from time to time, so it's not really surprising that a game combining the two genres grabbed me within moments of starting to play it. Defender's Quest: Valley of the Forgotten is the game in question; developed by Level Up Labs, the game is currently available only at defendersquest.com but, I'm told, is coming to "Steam and other digital download stores" soon.

Defender's Quest isn't just an RPG in which battles play out in tower defense levels; it's also a tower defense game in which the towers are individual characters with their own skill trees and gear. When you visit towns and such, you have an opportunity to spend the currency you've earned in battles on adding new characters to your roster or, if you prefer, on bolstering your existing group with new armor and weapons. As characters gain experience and level up, skill trees come into play that you can use to further customize them. The best thing about Defender's Quest, though, is the amount of control that you're afforded during battles.

If you're familiar with the tower defense genre, I'm sure you've experienced the familiar problem of towers not targeting the enemies you feel they should be focusing on. Defender's Quest addresses this by presenting you with a number of options that you can use to set different priorities for each character at any time. Perhaps you need a few of your guys to concentrate on bringing down the powerful fast-moving enemies while the rest bring down the army of slower enemies moving along the same path, or maybe your last man needs to focus on enemies that have already been weakened rather than wasting sword swings on those that he has no chance of killing on his own. No problem!

I'm at least a couple of hours into the free demo version of Defender's Quest at this point, and when I inevitably reach the end of it, I fully intend to spend $10 to unlock the full game. Both browser and downloadable versions of the demo are available, and it's possible to transfer your progress over to the full game regardless of which you choose. What are you waiting for?

You can play the browser demo or choose to download a version of Defender's Quest here:

Unlike most of the games that I feature in Free Play Friday, Bomb Buddies definitely employs something resembling a pay-to-win business model. The thing is, though, it's Bomberman! I point that out not just because I've been a big fan of the series since Dyna Blaster (the European title for the original Bomberman) came out for the Amiga and came bundled with a special adapter so that four people could play simultaneously, but also because I believe pay-to-win is something of a misnomer here.

Paying out 50 cents or so in order to start matches with two bombs instead of one is only an advantage for about the first five seconds, for example. That's because additional bombs--as well as speed boosts, punch/kick/throw power-ups, and more powerful explosions--litter the battlefield as soon as you and your opponents start blowing things up. In addition to power-ups, real money can be spent on the usual assortment of XP boosts and character customization options as well as on VIP status, with which you're afforded all manner of perks when running your own Bomb Buddies room. Most but not all of the items on offer are also available in return for the currency that you earn in-game.

I've spent only an hour or so with Bomb Buddies thus far, but now that I have the client installed, it's definitely a game I can see myself playing in short bursts from time to time. I mostly stick to the classic free-for-all format, but Team Deathmatch games are fun, and Zombie mode is good because if you die early on, you get to wander around as a troublesome zombie rather than just watch from the sidelines.

If you'd rather not install the client, Bomb Buddies can also be played on Facebook. Mac and iOS versions are also planned.

You might not have heard of this game before, but now that you know the title, odds are you already know what it is. It's Pac-Man with a Portal gun! It's also in Russian, so to save you the trouble of putting the accompanying description through a translator, I've gone ahead and done it for you:

"Crossbreed Pakmaya and portals :) Walk - arrows. Shoot - LMC (blue portal) and RMB (Orange) Passing through the blue portal (after creation) you will have access to the orange portal and vice versa. This is what we are deceiving ghosts. are also separate portals - the green, you can not change them, but you can go through them. --- So in training is all."

It's really that simple. You control Pac-Man with the arrow keys, aim the portal gun with your mouse, and fire blue and orange portals with the left and right mouse buttons respectively. The maze layout changes every time you clear a level, and when Pac-Man passes through a portal, mazes get reoriented so that the arrow key you have depressed keeps you moving in the same direction. It's simple, but clever, and it goes without saying that Pac-Man: The Portal is quite unlike any Pac-Man that you (or at least I, but probably you as well) have played before.

You can download Pac-Man: The Portal via the following link:

Pac-Man: The Portal on igdc.ru

Note that you need to extract the game from a .rar file. The "PMtP" application can be found inside the "release" folder.

Borderlands 2 wasn't the only game that came out this week to cater to those of us with a penchant for color-coded loot. Torchlight II was released just yesterday, and since I was fortunate enough to get the game a few days ahead of time, I can tell you that I've been enjoying every minute of my time with it.

Judging by how many people on my Steam friends list are already playing Torchlight II, I think it's reasonable to assume that a good number of you reading this have probably already bought the game. If you haven't, you should totally check out the demo. It lets you play around half of the game's first chapter (depending on your play style, that should take at least an hour or two) as any of the game's four character classes, and you can carry your progress into the full game should you decide to purchase it for the very reasonable sum of $19.99.

If you'd like to download the demo or purchase the game directly from Runic Games, you can do so here:

Alternatively, you can grab the demo or the full game on Steam via the following link: 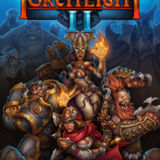