Infogrames releases the first info on and screenshots from its tennis game for the Xbox.

Infogrames is currently working on Tennis Slam, which will be released on the Xbox and the PlayStation 2 this July. According to the publisher, Slam Tennis is about re-creating the excitement, atmosphere, and challenge of modern professional tennis. The game features world-famous players such as Tim Henman, Carlos Moya, and Yevgeny Kafelnikov, as well as fictional players. Infogrames promises easy pick-up-and-play controls that enable players to pull off every shot in the book. Game modes include arcade, which is a one-player knockout game in which matches become increasingly difficult; exhibition, where one to four players compete in a single match, either singles or doubles; and championship, where players take part in events across the world with the aim to win the Slam Tennis Championship and unlock rewards such as bonus kits, hidden players, and new stadiums.

Additionally there will be challenge games, which basically consist of minigames similar to the Virtua Tennis series. In these minigames, players need to destroy beach balls with only one serve, use their array of shots to collapse columns before the clock runs down, or burst bubbles and thereby build points. 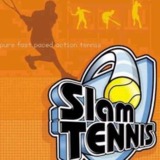