French publisher Wanadoo takes the wraps off its tennis simulation.

French publisher Wanadoo has released new screenshots of and info on its tennis simulation, simply named Next Generation Tennis. The game features two main licenses of the Roland Garros and US Open tournaments with six faithfully re-created courts. The organizers of both tennis tournaments supported the development team with plans of the courts so that they could be re-created identically to their real-life counterparts. As in the actual sport, there are five main types of shots: lob, topspin, normal, and slice, as well as sidespin. Of course the ball physics change according to the court surfaces. More than 500 animations were motion-captured during the development process, and a professional tennis coach gave input on the artificial intelligence of the computer players. In total, the game features 12 courts and four different surfaces, plus several locations and three training courts. Additionally, there are two hidden courts: a sand court and an ice court. Ten female and male professional players are also in the game.

As far as game modes are concerned, Next Generation Tennis offers quite a number of them. In the arcade mode, players can play successive opponents in singles or doubles. In the exhibition mode, it's possible to play singles, doubles, and two against one. In the singles games, the developers also offer the opportunity for a male to play against a female. The challenge mode lets you create your own tournaments. In the career mode you can create a player and aim to reach the highest level after 20 seasons, and in the race mode you have to defeat as many opponents in a row as possible in one-game or one-point matches--similar to a survival mode. Naturally, the game also offers a training mode in which players can hone their skills. Numerous bonuses can also be unlocked, such as hidden modes, locations, kits, players, or courts. As far as multiplayer goes, up to four players can compete via multitap on a PS2 and via LAN on a PC.

The game will ship in Europe this July. Details about a US release have not been given yet. Check out screenshots of the GBA version . 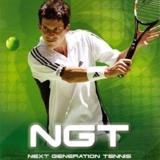