The 2000 RPG has already sold more than 5 million copies.

2000's Final Fantasy IX is coming to PC and smartphones in 2016, Square Enix announced today. It'll be released in Japan for those platforms sometime next year, though information about pricing or a Western launch was not divulged. You can check out a new trailer for Final Fantasy IX's re-release below.

The trailer (via Kotaku) shows off the game's improved graphics. There will also be new achievements, auto-save functionality, a "high speed" mode, and a number of "game-boosting features," according to the official announcement.

Square Enix also revealed that Final Fantasy IX has sold more than 5 million copies since it debuted in 2000 for the original PlayStation. The game was re-released for PlayStation 3, PlayStation Vita, and PSP through the PlayStation Network in 2010.

"Now you can relive the adventures of Zidane and his crew in the palm of your hands!" Square Enix said in its announcement today, referencing the mobile version. It'll be available for both iOS and Android devices. 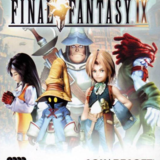