Final Fantasy Crystal Chronicles: Remastered Will Only Have Online Co-Op, Not Offline

The co-op Final Fantasy game will let you play with up to four players online, but not all on the same console.

Final Fantasy Crystal Chronicles: Remastered is releasing on August 27, but it'll be missing a major feature from the original GameCube version. The game's Japanese Twitter account has confirmed that the game will only feature online multiplayer, and you won't be able to set up an offline co-op session.

The tweet below, roughly translated, says that the game does not feature offline multiplayer, with online play prioritized so that more people would be able to play together.

The original GameCube release had couch co-op, but with a twist--extra players beyond the first would need to connect with a Game Boy Advance link cable and play on Nintendo's handheld device. Getting together three extra players who all owned the console and the link cable meant that co-op Crystal Chronicles was a fairly niche activity.

Interestingly, a team of four can tackle the game online as long as just one person owns it. A Lite version demo will let you play through the full game if the host owns it, or three dungeons with other folks who downloaded this free version.

Since crossplay is enabled, there's theoretically nothing stopping Switch and mobile players, at least, playing together on separate devices in the same room. But if you're looking to get four players together on a single television, you're out of luck. 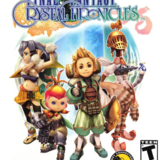