Check out a new look at the first-touch controls found in EA's inagural PSP soccer game.

How does the world's most popular sport fit the world's newest handheld gaming rig? If you're talking about EA Sports' FIFA Soccer for the Sony PSP, the answer seems to be: very well indeed. We recently had a chance to play a work-in-progress version of the publisher's premier soccer franchise and came away impressed with what we've seen so far.

First and foremost, considering the amount of variety packed into FIFA Soccer's gameplay alone, it's hard to believe this is a handheld game, much less a launch handheld game. You will find the requisite quick play, season, and tournament modes, and the game also includes a challenge mode and, of course, the vaunted wireless multiplayer capabilities. In challenge mode, you'll take control of teams from the spectrum of licensed leagues found in the FIFA series and will be asked to prevail in any number of trying circumstances, whether by mounting an impressive comeback or by routing a rival by a set number of goals. Each challenge has a time limit associated with it; in order to win, you'll need to work not only well, but fast.

FIFA Soccer's tournament mode lets you compete in a variety of real-world cup tournaments, such as the French Coupe de France, the English League Cup, or the American MLS Open Cup, among many others. If that doesn't interest you, you can create a tournament of your own, deciding on factors such as tourney name and type, number of participating teams, number of fixtures against each team, and group round format.

The first-touch controls that made the console versions of FIFA Soccer such an improved game over its sequels are here in the PSP game as well. Obviously the controls are a bit different on the PSP, as the handheld lacks a right analog stick like that of the PS2 dual analog controller. As such, you'll perform first-touch moves with the directional pad, which feels strange since you'll need to lift your thumb off the PSP's analog stick (used to control player movement) to do so. In essence, you have to give up control of your player, however briefly, in order to gain better control of the ball. On the plus side, the ball physics, which were superb in the console versions of the game, are excellent here as well. The ball feels like a separate entity entirely on the pitch, one that is as prone to strange bounces as it is in the real game of footy.

Once you've adjusted yourself to the slightly modified control scheme, you'll find a game that both looks and sounds surprisingly polished. Unlike some of the other PSP launch sports games, FIFA Soccer features play-by-play and color commentary from the familiar team of John Motson and Alley McCoist, incomprehensible Scottish brogue and all. The slick replays of goals are enhanced by telestrator drawings that show just how a play unfolded on the field.

Graphically, FIFA Soccer looks nearly like a direct port of the console versions of the game, with only slightly less detailed player models. When viewed close up, the player models tend to move a bit slowly, but when the camera is pulled back in a standard game view, they move at a fine pace. Some environmental visuals, such as the stadiums, crowds, and weather effects like rain, could use a makeover, but not to the point where it takes away from the overall quality of the visuals.

With a host of game modes, an attractive presentation, one-on-one wireless multiplayer, and extras such as the ability to save your matches at any point, FIFA Soccer is looking to be a worthy port of its console cousin. We'll have a full review of the game later this month, when the game hits retail stores. 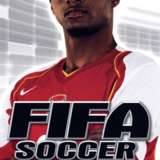