Fantasy Strike promises to be tournament-style fighting game simple enough to bring in players new to the genre.

[UPDATE] A crowdfunding page for Fantasy Strike is now available on Fig. The developers are looking to raise $500,000 by August 25. You can learn more here on the funding page.

Whether you're a long-time fan of 2D fighting games or new to the genre, Fantasy Strike is promising its gameplay will appeal to you. Developer Sirlin Games, whose founder was a designer on Super Street Fighter II Turbo HD Remix, is raising money on Patreon for the game.

Fantasy Strike's controls will all be single-button press, with a unique system for countering certain attacks. If your opponent goes to throw you, letting go of your controls will trigger a punishing move called a Yomi Counter. However, attempting this leaves you vulnerable to non-throw attacks. The developer says it's emphasising player decisions over dexterity, letting you do special movies easily to avoid difficult-to-execute techniques throughout the game.

"You also don't have to worry about doing moves with 1/60th of a second accuracy, as is common in fighting games. In Fantasy Strike, anytime you try to do a move, we automatically repeat your input for 8/60ths of a second to make sure it comes out, every time. The hard part should be deciding if you want to do a move, not in getting it to happen once you've decided," said the developer. Get a look at some of the beautiful early gameplay below.

The game is still in pre-alpha development, but so far there are eight playable characters (all from the card-style fighting game Yomi) and four levels with more in the works. There are several game modes, including arcade, local versus, and training mode (with online play starting this month).

"We're boiling down the genre to the fundamentals and cutting out everything that we don't need. Our game is so simple to play that even if you don't normally play fighting games, you still might love Fantasy Strike. And for fighting game veterans: this is a tournament, esport game," Sirlin Games said.

Anyone who contributes at Silver Level ($10/month) or higher gets access to the pre-alpha game and future updates. Fantasy Strike is scheduled for release in Q3 2018 and is being developed for PlayStation 4 and PC. 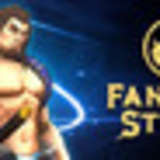