Check out the first screenshots from Conflict Zone for the PS2.

Ubi Soft has released first screenshots from the PlayStation 2 version of Conflict Zone, a real-time strategy game that is also available on PC and is due out very soon for the Dreamcast. Conflict Zone's story is set in the future, where a great majority of countries have decided to unite themselves in order to create peace. The alliance is named the International Corps for Peace (ICP). A secret organization called GHOST is threatening the peace by creating crises to serve its own economic agenda without paying any moral consideration to the consequences. The ICP is the only organization powerful enough to fight them.

Players can assume the role of either the ICP or the GHOST organization and dive into the center of international conflicts. The game will span more than 16 missions in two campaigns, with two hidden missions (ICP or GHOST). Both of the parties will have more than 65 units for the player to choose from. There's currently no information regarding PS2-specific features, but we'll keep you updated.

Conflict Zone is due out in November on the PS2, whereas the DC version is scheduled to appear at the end of September. The game will be published by Ubi Soft. 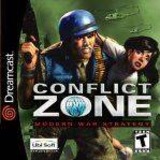