Madden 19 will be the first game in the series to release on PC in more than a decade.

EA's pre-E3 event, EA Play, has held its press conference, revealing news about a variety of its games. Among those to be shown was the previously revealed Madden NFL 19. This year's installment in the annual football franchise has already been confirmed for PS4 and Xbox One, and now we've learned that it will bring the franchise back to PC for the first time in a very long while.

EA has announced that Madden 19 will launch for PC alongside the console versions, on August 10. This makes it the first entry in the series to release on the platform in more than a decade; the last Madden game to come to PC was 2007's Madden 08. [Update: EA Sports has confirmed that Madden 19 will not be available on Nintendo Switch.]

Madden 19 will be released in standard and Hall of Fame editions. We don't who will grace the cover of the former, while Terrell Owens will be featured on the latter. Those who pre-order the standard edition will get five Gold Team Fantasy packs and an Elite player from the team of their choice. Meanwhile, reserving the HOF version will also get access to the game three days early, on August 7. 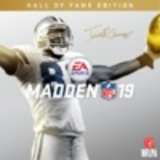