E3 2017: Echo Arena Is Basically Zero-Gravity Rugby In VR, And It's Awesome 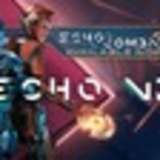 I've found virtual reality a tough sell. Nothing I've played yet seems particularly amazing; I've certainly had fun shooting things in some of the many shooting galleries there are, and I enjoyed looking around beautiful worlds, like Bound's, in VR. But, at least from the admittedly limited games I've played, VR has always seemed more like window dressing than any sort of fundamental shift in the way games are played.

A five vs. five, zero-gravity competitive game changed that for me. Echo Arena, the multiplayer spinoff of Lone Echo, gave me a chance to see the full capabilities of room-scale VR, and--more than a year after its consumer release--I finally get it.

In Echo Arena, you have several tools at your disposal to move, fight, grab, and throw. The developer describes it as zero-G ultimate frisbee, but I found it to be more like rugby, or even Quidditch from Harry Potter, than anything else. You grab a disk, fly as fast as you can at the hoop at the other end of the arena, and attempt to score.

You have three ways to move. First, you can grab objects in the environment and literally throw yourself forward. I was playing in an Oculus Rift, so I flailed wildly with the Touch controllers to catapult over a railing or a box. You also have a boost mode that lets you use your character's exosuit jets to rocket forward in a specific direction, with no ability to change trajectory unless you break. Finally, and most usefully, your hands have smaller, directional jets on them. Simply point in the direction that you want to go, hold down the jet button, and you'll go there. These jets allow you a much greater level of control, and finding a way to make constant, small adjustments to your motion is essential to playing the game.

It's not as easy as rocketing over to the disk, picking it up, and sprinting for the goal, though. When I had the disk, I felt like I was back in middle and high school playing a contact sport--the feeling of having control of the ball while an entire team is looking to get it away from you by any means necessary, is both exhilarating and slightly frightening. And in Echo Arena, the main means of defense is to punch the disk carrier. Clocking another player in the face--in the safety of the VR arena, of course--will stun them for a few seconds and force them to drop the disk.

I only played about half an hour of Echo Arena, but I felt like it gave me a level of agency over the game that I've never experienced before in a competitive multiplayer game. Having a one-to-one representation of myself--well, at least my arms and head--made me more invested in what I was doing. Once I got acquainted with the movement, I didn't feel like I was struggling with mechanics. If I did something wrong, it was because I, myself, did not move fast enough or well enough physically. In other words, I was actually playing a physical sport.

One of the biggest challenges that this game faces is how to ensure that flying around in zero-G, spinning around, and flinging your arms around while trying to keep track of seven other people and a disk, won't make you sick. That would be the deathknell of this game, and I've heard anecdotally that some people get very sick from playing this game. I found myself unsteady a couple times, as flying rapidly in three-dimensional virtual space while standing upright isn't completely easy. But besides moments of slight imbalance, and one time actually punching a wall by accident, I never experienced motion sickness. Thankfully, Echo Arena keeps your legs always beneath you, so you won't be cartwheeling through the arena. That would make me sick.

Believe it or not, this game is in development at Ready At Dawn, the studio behind The Order: 1886. From what I could see, there are very few parallels to draw between the two games. Lone Echo, the single-player component of the game, is completely different: it's more along the lines of Adr1ft, and The Order's influence is clear. But it is both surprising and encouraging to see Ready At Dawn try something risky and completely different, and from my short look, I came away more than sold that a five vs. five game can work in VR. And, even better, Echo Arena will be free when it launches on Oculus Rift on July 20.

Alex Newhouse is a news writer who's also a three-time GameSpot intern. In addition to writing about video games, he runs a research center on terrorism- and extremism-related subjects. He's put far too much time into Steep and Destiny.