TERA is an action-packed massively multiplayer game from En Masse. We give the game another try at E3 and come away with new details on the game's political system.

The 2011 Electronic Entertainment Expo is in full swing, as are ongoing press demonstrations for TERA, the hybrid action massively multiplayer game from Blue Hole and En Masse. At a closed demonstration, representatives from En Masse gave us another chance to play through a part of the game after briefly discussing one of the game's previously unrevealed features: its political system.

As vanarch, you can make several choices, such as levying higher or lower taxes on goods sold within the province, enabling skill trainers or special merchants, and even temporarily imprisoning players who cause too much trouble. You and your guildmates will also gain access to special vanarch-only mounts--horses adorned with fancy red barding. However, the En Masse representatives suggested that to stay in power, you'll need to maintain popular support, either through continual campaigning or by earning special points that can be gained only from exceptionally challenging vanarch-only quests.

Our play session involved the latter type of quest. In this case, it was to enter a burned-out, lava-filled zone called the Burning Vale , which GameSpot unveiled earlier this year. We joined a five-character party that consisted of a healer, two frontline fighters, an archer, and our character who was a sorcerer equipped with fire, ice, and electricity spells. Just as we did with our previous sorcerer character, we kept this character safely behind the rest of the party because, as you might expect, we were a lot more fragile and weren't wearing any heavy armor. We rode into the battle astride our swanky vanarch steeds and then dismounted when we discovered the scaly brute. Like with all other boss monsters we've seen in TERA, this one was huge and had many special abilities, such as leaping high into the air and making a flaming dive-bomb attack downward. This knocked us off our feet with a swipe of its tail, and then it burrowed underground temporarily only to leap out of the earth in a different location later.

Fortunately, from our vantage point behind the frontliners, the battle didn't seem too costly. We lost one of our swordsmen (who had to be revived by our healer), but otherwise, our party kept a steady stream of hurt going on the beast. We did what we could to contribute by repeatedly tossing every damaging spell we had at it, taking special care to use our more-damaging (but slower) area-of-effect spells whenever our warriors could briefly stun the beast. Because there were other wandering monsters in the area, we were a lot less aggressive in this battle than we otherwise might have been, and we weaved in and out of battle while constantly checking our flanks for additional foes. It's likely that we did much less damage than we probably should have been doing because we didn't have too many opportunities to use TERA's combination attacks. The sorcerer, like other characters in the game, has basic attack abilities that set up a specific follow-up attack. This deals bonus damage and can be triggered with a simple tap of the space bar. Finally, the brute tumbled to the ground, and our party claimed victory, and the demo came to a close.

TERA remains an unusual entry into the world of massively multiplayer games, and with any luck, the game's political system will add more depth for high-level players who have killed all the monsters there are to kill. The game will be released later this year. 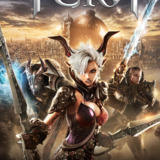