We return to the Otherworld in the eerie Silent Hill: Downpour.

Rain. Fog. Cops. The Silent Hill series has no shortage of these things. Silent Hill: Downpour continues this grand tradition in style, and we were able to play a short demo on the E3 2011 show floor. If the title is any indication, water will play an important part in this survival horror action game, and indeed, the demo features plenty of it. It also features a new protagonist, Murphy. (Murphy Pendleton, to be more exact.) Murphy is a prisoner aboard a bus full of inmates that crashes in an eerie forest. The demo opens with brief shots of the bus speeding down a road as rain floods from the darkness above. We see a few choice shots of the bearded Murphy and a police officer fall to her death, before the game deposits us, as Murphy, onto the road--shaken but definitely not dead.

The demo starts slowly, setting the mood. We explore a filling station, using a crowbar we find in a nearby toolbox to break open a padlock and ascend to the roof. On the roof, we look down to marvel at the cop-swallowing canyon below. We then drop to the ground beneath, lift the garage door, and make our way back to the street. We move on to a tram station, where we find some game tokens--but unfortunately, the machine that allows tram access has been removed, forcing us to head back to the street to continue our exploration. Of course, this being Silent Hill, our travels are always accompanied by dark ambient music, and heavy shadows and gritty textures communicate--clearly--that scary things lie in wait.

We make our way toward a diner, called the Pit Stop, where a classic but decrepit automobile catches Murphy's eye. He peeks inside, and when pulling his gaze away, he is caught unawares by a postal carrier who introduces himself as Howard. He tells us of the tram, and putting two and two together, surmises that Murphy is an escaped convict. Howard does not seem a friendly presence in spite of his gentle reminder that he is "just trying to be helpful." We don't buy it, and neither does Murphy, after he glances toward a window above to see a lanky figure there. The figure disappears, and Howard mentions, almost too casually, that the roads out of town all happen to be out. Murphy asks where he is, but the mailman remains coy. But of course, we all know what town Murphy is about to wander into: the infamous Silent Hill.

Howard leaves, and we make our way into the diner, searching for a change of clothes. We grab a fire extinguisher as a weapon (just in case) and head into the kitchen. Murphy remarks that "the gas is on," and a few moments later, a blaze erupts. We hurry to the fire alarm and pull, which sets off the sprinklers. Water pours forth--but that's not the only effect the alarm has. As the water flows, everything changes: the walls turn slimy, and the entire fabric of reality takes on a rusty hue. This is the alternate dimension of Silent Hill, called the Otherworld. Murphy must get over his initial surprise to turn off a nearby circuit breaker and run up a staircase. In the room at the top of the stairs, we turn a portrait on a wall by rotating a thumbstick, at which point a dead caged demon descends from a compartment above and another door slides open.

From here, things get sticky. After heading through the doorway, the room becomes awash with red light. An evil presence has arrived. You don't see a figure, only blinding light, and you have but one option: run. And so we run down the hallway, which keeps elongating as we sprint. We finally reach the end, turn the corner, and slide down to the main floor. The nightmarish light continues to give chase until we reach an exit, which initiates another slide down into… well… we don't know, for the demo then ends. It also leaves us a bit shaken, meaning the game succeeded in doing its job: scaring the pants off of us, even on a crowded E3 floor.

Is Silent Hill: Downpour creepy? For sure. Was the demo entertaining and atmospheric? Absolutely. Downpour feels and plays like Silent Hill, from the onscreen fonts to the vague sense of dread permeating every step. The game is coming to the PlayStation 3 and the Xbox 360. We don't yet know when Silent Hill: Downpour will be released, but keep your eyeballs glued to the otherworldly GameSpot for more information as it bleeds out. 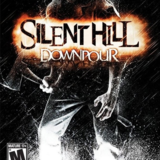