We did the mash, the monster mash in this new role-playing/fighting hybrid from Eidos.

Monster Lab is not your typical turn-based role-playing game. A spooky blend of RPG and fighting genres, Monster Lab has you create and customize your own monster and then take it out into the world to beat up on other monsters--a regular monster mash.

You see, the evil Baron Mharti has taken over the land with his own monster creations, sinister blends of the three major evil sciences of the time: evil robotics, evil biology, and evil alchemy. As a budding mad scientist yourself, you'll learn each of these evil sciences as you gain experience by eliminating other monsters and stealing their parts. There are more than 150 monster parts available, and you can mix and match heads, arms, legs, and torsos. Feel like smacking Dracula's head on a zombie torso with a giant mace for a right arm along with legs made of mud? Have at it. You can customize and store 10 monsters that will gain access to more valuable parts as you explore the game's six major areas.

To engage in combat, simply move your monster creation on an overworld map and touch an enemy or wait for an enemy to touch you. You're then transported to the combat screen, which looks just like a traditional fighting game, only with the addition of a list of attack moves. Your moves will vary based on the composition of your monster. The evil robot we saw in action had a side kick, a punch, and a menacing chomp. As you cycle through the moves, you see where the attack will do the most damage. You can even knock off arms, legs, and enemies' heads, which will remove attacks based on the missing part. It's hard to perform a drop kick when you have no legs. You win the battle by destroying the torso.

Each monster operates on an energy meter, and early on, you may only have six energy points. Because each attack costs energy points--usually more than six--your attacks will be limited until you can upgrade your monster. You do have a recharge move that refills the tank, although it costs an entire turn, opening you up to an attack from your enemy.

You can return to the lab at any time and repair your monster or add new parts. There are a number of interesting minigames, such as welding. To add a giant mace arm, you'll actually use the Wii Remote to aim a welding torch to attach the pieces in a side-scrolling game. Newly outfitted, you can return to the fight even powerful than before. Your enemies are created by a monster generator that randomly selects their parts, so you'll never fight the same monster twice.

Look for Monster Lab as it hits stores, appropriately, this Halloween. 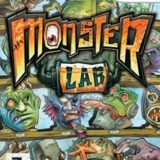