Obi-Wan was originally developed for the PC, but now it's coming to the Xbox. Check out our hands-on report and find out how it's faring in its transition to a console.

Obi-Wan was originally developed for the PC, but when it was unceremoniously cancelled, rumors began to circulate that it could be coming to the Xbox. Shortly before E3, LucasArts confirmed those suspicions when it announced that Obi-Wan was indeed headed to Microsoft's first video game console. Now six months into its development cycle, Obi-Wan is playable at E3 and on display at LucasArts' booth.

Obi-Wan is a third-person adventure game set in and around the events of Episode I: The Phantom Menace. The PC version of Obi-Wan included 12 levels of gameplay, but LucasArts stated that the Xbox version could include as many as 19. In the adventure mode, you play as Obi-Wan Kenobi as he carries out the bidding of the Jedi council. The varied mission objectives include executing seek-and-destroy missions, rescuing Queen Amidala, protecting NPCs, and many more. The adventure levels take place in a variety of authentic Star Wars environments such as a federation battle cruiser, the swamps of Theed, and Tatooine. The game culminates with a final showdown with the sinister Sith lord, Darth Maul. Obi-Wan also includes a virtual battle mode that lets you take on a succession of opponents to perfect your Jedi battle skills.

The left analog stick is used to move Obi-Wan, and the right analog stick controls his light saber. If you hold the right analog stick down and push it up, Obi-Wan will perform an upward sweep with his saber. Likewise, holding it up and pushing down makes him swing down on the enemies. To perform sweeping forehand and backhand swipes, you simply roll the analog stick around. Beyond the basics, Obi-Wan includes a variety of moves to perform. Acrobatics such as cartwheels, front flips, and back flips are performed by pressing the Y button in conjunction with pushing the analog stick in a variety of directions. Squeezing the left trigger will make Obi-Wan lock on to enemies. Jumping is accomplished by pressing the A button. The graphics may be slowed down to create an effect similar to bullet time from The Matrix, and the light saber may be thrown to attack enemies from a distance. Obi-Wan will eventually be able to knock enemies on their backs with a force push, run at superhuman speeds using force speed, retrieve objects from a distance using a force pull, and grab enemies and give them a toss with the force throw. Additionally, Obi-Wan can also heal himself with the force or with the bacta tanks that are scattered throughout the game. Obi-Wan will also control several vehicles throughout the game, including land speeders and tanks.

It should be stated that Obi-Wan is still very early in development and may be greatly improved before it ships, but in its current state, it's not on par visually with the majority of the playable Xbox games at E3. There are a few nice details included thus far, such as real-time reflections, a nice blurring effect for the light sabers, and small details like the light sabers leaving scorch marks on the walls. The camera is panned out a great deal, so it's difficult to make out any details on the characters. The game also plays quite sluggishly in its current state, and its stuttering frame rates don't help matters much. Obi-Wan will be released with the Xbox in the fall, so there is plenty of time for LucasArts to clean up the graphics.

If LucasArts can tie down the technical aspects of Obi-Wan, it could be the most engaging Episode I-based adventure game to be released for a console. We'll have more on Obi-Wan for the Xbox when it becomes available. 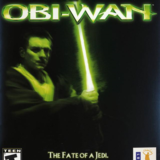