LOS ANGELES--Sony's Phil Harrison took to the stage at the company's pre-Electronic Entertainment Expo press conference to demonstrate the next-generation of SingStar on the PlayStation 3. The new game will be playable at Sony's booth when E3 starts on Wednesday on both the PlayStation 2 and PS3, but the next-generation version boasts far more comprehensive network features.

The karaoke game has been massively popular in Europe, where no fewer than five versions of the game have been released to date. These have included the original, Party, Popworld, '80s, and Rocks, but so far the US has not seen any of these versions. It was therefore an interesting choice to demonstrate this title in LA ahead of E3. However, the game seemed perfectly suited to show off the PlayStation 3's online features.

By monitoring your timing and pitch as you sing along to pop music videos, the game is able to score your efforts and give you real-time feedback as to how well you are doing. The PlayStation 3 game will let you compete against other people online, as well as on the same console.

Previously, the SingStar games have offered new track lists via themed updates, but the PS3 version will have downloadable tracks from the online SingStore, which will then be stored to the console's hard drive. In line with the company's high-definition vision for the console, all of these tracks will be offered with videos in HD resolution.

Phil Harrison had one of the Sony demonstrators show some of the artists that will be included in the game, most of which have been featured in previous SingStar games. The selection included George Michael, Franz Ferdinand, Destiny's Child, and Good Charlotte, before settling on the latter artist's "Girls and Boys." This song was featured in the original PS2 SingStar, and the interface on the PlayStation 3 looked largely the same.

At this stage, little is known about the online system itself, but Harrison said that the system will offer a wallet for buying songs, as well as parental controls that will limit the amount that can be spent. Once downloaded, the songs are stored on your hard drive for future use in the game under the Personal Song selection.

The new SingStar will also let you contribute to the community with My SingStar, enabling users to develop a profile, find out who's online, upload your performances, and download skins and other graphical effects.

Phil Harrison didn't treat us to a live singing demonstration of the game, so we'll be heading over to Sony's PlayStation 3 booth for more details later in the week. 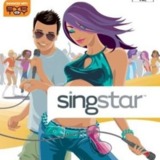