Activision has the exclusive license to create Spider-Man games, but it has no such monopoly on the webbed wonder's set of powers. THQ today announced Deadly Creatures for the Wii, which is going to let gamers experience the proportional strength and speed of a spider, primarily because they will play as a spider.

Developed by Rainbow Studios, the outfit behind MX vs. ATV and Pixar's Cars series of games, Deadly Creatures casts players into the unsettlingly numerous shoes of a scorpion and a tarantula as they take on cross-phylum adversaries, including Gila monsters, wasps, black widows, and even humans. In a statement announcing the game, THQ director of global brand management Randy Shoemaker indirectly addressed a number of complaints that have been levied against Nintendo's console.

"With Deadly Creatures, we are raising the bar for all third-party Wii titles," Shoemaker said, "and focusing on deep, compelling gameplay for a largely untapped audience of Wii gamers."

THQ has promised that the game's combo-based, motion-controlled combat system will yield "brutal" action when it sees release later this year. Deadly Creatures has not yet been rated, nor has the publisher indicated what rating it is targeting. 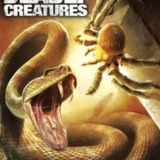