Dead to Rights for PC unplayable?

GameSpot editors were eager to start playing the new, just-released PC version of Dead to Rights, Namco's Hong Kong-style shooter that is already available for the Xbox, GameCube, and PlayStation 2. However, attempts to get anywhere in the game were rebuffed when an unavoidable, impassible bug in the game's opening level was encountered.

Those who have played other versions of Dead to Rights may recall that the first level of the game, which is mandatory, walks you through the various play mechanics. One such mechanic is protagonist Jack Slate's ability to pick up flammable canisters, throw them at his enemies, and shoot the canisters near the point of impact, causing all nearby foes to be caught in the blast.

Unfortunately, in the PC version of Dead to Rights, Jack Slate doesn't actually pick up the flammable canister during the noninteractive sequence in which he's supposed to. What happens next is that the player is expected to throw a canister with which he or she is not equipped, and the game essentially locks up, preventing the player from proceeding any further.

Editors confirmed this bug on two different systems, each exceeding the game's recommended requirements and equipped with all the latest drivers, and with two separate, previously unopened, retail box copies of the game. Interestingly, GameSpot editors recently tested a near-final preview build of Dead to Rights for the PC which did not have this problem.

Although efforts to reach developer Hip Games were unsuccessful at first, the company has since contacted GameSpot to assure the public a downloadable patch will be available shortly. 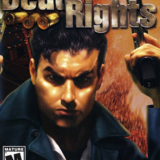