A concept trailer for this PSP RPG offers possible clues to its storyline.

While once each Final Fantasy game stood on its own, Square Enix has increasingly shown a willingness to revisit the worlds of certain games. A good example is what the company calls its Compilation of Final Fantasy VII, which includes the Advent Children movie in development, the Before Crisis game for mobile phones, and the upcoming Vincent-rich Dirge of Cerberus for the PlayStiaton 2. Crisis Core - Final Fantasy VII is another game in the mix, an upcoming PlayStation Portable action role-playing game that Square Enix promises will "exceed the expectations of fans."

There aren't many details about the game available, but Square Enix did show an animated concept trailer. The trailer revolved around Zack, the soldier who fought alongside Cloud before the events of the original Final Fantasy VII. It showed a rendering of the Final Fantasy VII bit where Zack and Cloud spoke together, interspersed with images of Sephiroth going mad in Nibelheim and many scenes of Zack in battle. This suggests that Crisis Core will be a prequel to its source material, with Zack as the main character.

We'll continue to relate news about Crisis Core as it is made available, so keep watching this gamespace for details. 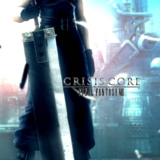