While the remake of Crash Team Racing has ended its run of new Grand Prix on PS4, Switch, and Xbox One, more content is still planned.

Crash Team Racing: Nitro-Fueled has run its last Grand Prix content release, but more characters, vehicles, and more are still being released for the game. Developer Beenox has announced a raft of new content coming to the game soon on the Activision Blog.

Coming first is the "Beenox Pack," which is available in an update right now. It will unlock Geary and Crunch as racers in the game if you haven't gotten them already, and you'll also nab a Beenox-themed kart, paintjob, sticker, and set of wheels. Beenox-themed skins are available for Crash, Cortex, and Crunch, while Geary has his first ever legendary skin.

The Wumpa Challenge system is also coming, with rotating daily, weekly, and monthly challenges coming. The Ghost Hunt challenge type is coming back on Nina's Nightmare track, as are developer time trials, which will put you against the fastest times managed by the developers at Beenox.

You can also still claim the Champion Kart, even if you didn't take part in the Grand Prix, by completing Oxide and Velo's time trials. Beat them all to nab the kart and special signature decals.

New pit stop content is also coming, including an extremely cursed new character, Baby Cortex (pictured below). Here's everything you can nab:

Rilla Roo has also been "fixed," so if you don't like his character design in Nitro Fueled, you might be happier now. You can also, amusingly, unlock the Iron Checkpoint Crate as a playable character by finding and collecting every Beenox crate in each track.

New paint jobs and a soundtrack option are coming, as is a leaderboard wipe, starting everyone afresh and wiping out some bugged times that had risen to the top.

Crash Team Racing: Nitro Re-Fueled received an 8/10 in GameSpot's review. Oscar Dayus praised the game as an excellent remaster: "Nitro-Fueled maintains the spirit and rock-solid foundations of a childhood favorite while building on it and modernizing it where necessary--even if the handling might take a bit of getting used to."

The game (along with the Crash Bandicoot N.Sane Trilogy and Spyro Reignited), has done well enough that Activision is planning more remasters in the near future. Meanwhile, some fans believe Sony has been hinting at a new Crash Bandicoot game. 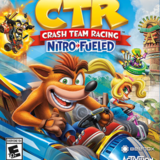