Source: Data-mining blog Superannuation, relating the LinkedIn profile of a former Edge of Reality producer. What we heard: Edge of Reality's Cipher Complex charts the travails of one John Cipher, a secret US government operative who is tasked with investigating a downed recon satellite. It could... 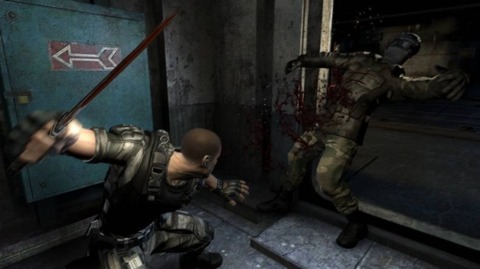 What we heard: Edge of Reality's Cipher Complex charts the travails of one John Cipher, a secret US government operative who is tasked with investigating a downed recon satellite. It could be considered apropos, then, that so little information regarding the modern-day first-person shooter has been doled out since the game was announced in June 2006. To date, Sega has only released a handful of screenshots and some concept art for the game.

Now, the reason for Cipher Complex's radio silence appears to have surfaced. As spotted by the increasingly prolific Superannuation, the LinkedIn profile of a former Edge of Reality producer indicates that Sega pulled the plug on the Xbox 360 and PlayStation 3 game earlier this year. "Producer for Cipher Complex that was canceled by Sega," reads the job description of Rob Brown, who served on the project from July 2008 to January 2009.

Oddly, if Cipher Complex has been canceled, Sega and Edge of Reality have made no outward signs of saying so. The game's Web site remains wholly intact, if devoid of content, and the developer's Web site continues to promote the project. Still, Sega has been less than forthright with other canceled projects this year. Notably, the publisher didn't confirm the cancellation of Obsidian Entertainment's Aliens role-playing game until June, four months after the information initially surfaced.

The official story: Neither Sega nor Edge of Reality had responded to requests for comment as of press time.

Bogus or not bogus?: Barring some kind of vendetta, it seems unlikely that Brown would fabricate Cipher Complex's demise, so this one's looking not bogus. Officially, though, the game remains on Sega's books.