Captain America WWII game due in 2011

Sega announces comic book hero will return to his propaganda roots to fight Nazis on Xbox 360, PS3, PSP, Wii, and DS next year.

When he debuted in 1941, Captain America was part comic book hero, part World War II propaganda tool. In his first run of comics, the star-spangled hero was created with an experimental serum to aid the US war effort. And aid he did, fighting Nazi collaborators to help win WWII.

Over the past few decades, Captain America was reintroduced as a member of the Avengers, the modern-day superhero group that also includes Iron Man, Thor, and the Hulk. However, Sega is taking the shield-wielding hero back to his WWII beginnings in the forthcoming game Captain America: Super Soldier. The game will be based on the eponymous film, which stars Chris Evans (Fantastic 4), Tommy Lee Jones (No Country for Old Men), and Samuel L. Jackson (Iron Man 2). The movie had been titled Captain America: First Avenger.

Like the comics, Super Soldier will see Captain American facing off against his nemesis, the Nazi agent Red Skull. Beginning during the height of WWII, the third-person action adventure will be set in a sprawling castle complex and will feature foes from the comic books, including the Iron Cross and members of the terrorist group HYDRA. Gameplay will have an emphasis on hand-to-hand combat involving the superhero's indestructible shield as well as platforming sequences.

Captain America: Super Soldier is in development at Canadian studio Next Level (the new Punch-Out) and will ship for the Wii, DS, PSP, PS3, and Xbox 360 sometime in 2011. Sega's Thor game is also expected next year alongside its own filmic inspiration. 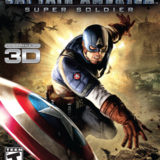