Capcom has revealed a new online game called Monster Hunter at its pre-E3 conference. The game will feature support for up to four players online, though Monster Hunter will also have an offline mode. The trailer that Capcom showed had two armor-equipped characters with massive swords running around inside of a forest, away from an enormous dinosaur. Unfortunately, Capcom wouldn’t say which platform Monster Hunter is currently in development for, though it appeared to be running on PlayStation 2 hardware. 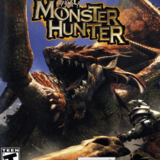