Between Gears of War, Lost Planet, Crackdown, Saints Row, and more, Xbox 360 owners already have a wealth of third-person shooters to choose from. However, none of those games is set in the near future with a witch who casts spells and carries a gun bigger than she is. Atari is ready to rectify the situation. The financially troubled publisher today announced that Bullet Witch has gone gold and will be available in North American stores by the end of the month.

While Bullet Witch has already been released in Japan, Atari has made a number of tweaks to the game for the North American and European releases. The publisher said it has addressed issues with the camera placement during battles and improved the enemy artificial intelligence, among other things. A series of five downloadable content packs will also be made available on the Xbox Live Marketplace, each one including a new costume and "revised levels."

Bullet Witch was originally developed by Cavia (Drakengard, Beat Down) and will retail for $49.99 when it's released February 27. For more on the game, check out GameSpot's previous coverage. 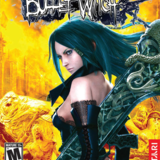