Second installment in EA-Steven Spielberg collaboration tumbling onto the Wii next month.

Steven Spielberg's Boom Blox for the Wii may not have been the breakout hit that EA was hoping for, but it performed well enough for the publisher to commission a sequel. EA Casual said today that Boom Blox Bash Party for the Wii, which was first announced in January, will ship to retailers on May 19.

Bash Party is the sequel to the first Boom Blox, which debuted to positive reviews in May 2008. Like its predecessor, it relies heavily on the Wii's motion-based controls, with players attempting to topple various types of blocks with an assortment of projectiles. However, a number of tweaks have been made to the original physics-based gameplay, including new underwater and zero-gravity arenas, block types and shapes, and tools, such as a cannon, a paint ball, and a slingshot.

In all, Bash Party will include 400 stages, up from the 300 seen in the original. EA has also significantly expanded the game's multiplayer component, doubling the original game's 60 group-friendly levels.

The Create mode, in which players can devise their own custom stages, has also seen attention, with gamers now being afforded access to the same suite of tools used by the game's developers. User-generated levels can also be uploaded online for others to play, and EA promises that in-house-produced new levels will also be available for download. 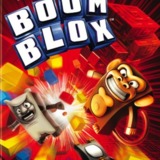