Hudson will drop a bomb on Xbox Live Arcade later this summer with this whimsical, competitive nostalgia trip.

Hudson Soft's sales pitch for its new Xbox Live Arcade offering, Bomberman Live, begins with an apology for last year's atrocious Act Zero. That edgy take on the classic cutesy multiplayer Bomberman franchise was designed and developed in a bubble by a Japanese team that wanted to make a Bomberman game for Americans without actually stopping to ask American gamers what they'd want in a Bomberman game. As it turns out, the Americans want the same thing out of Bomberman as their Japanese counterparts: lots of silly, googly-eyed dudes running around, hurling bombs, and blowing each other up. Longtime Bomberman players know this sort of intense competition and friendly trash-talking works in any language.

Luckily, that's exactly what you'll get in Bomberman Live, and you'll get a whole lot of it. This new game borrows level designs and power-ups from the best Bomberman games in the series. These include the iterations that appeared on the Super Nintendo, Saturn, and PC Engine; thus, the new game creates a comprehensive whole that even Hudson admits might be the last Bomberman game you'll ever need. Because it supports up to eight players via Xbox Live, will feature support for future downloadable content add-ons, and may even include sponsored tournaments with prizes available, we're inclined to believe Hudson may be right.

Unlike Act Zero, Bomberman Live thankfully doesn't mess with the Bomberman formula one bit. In fact, the American development team collaborated with Hudson's Japanese studio to make sure everything would feel authentic for series fans, all the way down to the bomb-throwing physics and character-movement metrics. Just in case you've never tried this series out over its lengthy history, Bomberman simply has you running around a grid-based level with a number of other players, and everyone throws bombs that explode in the cardinal directions down each adjacent corridor. You can set up combos by laying multiple bombs next to each other, as well as gather items that will enhance your destructive abilities in some madcap ways.

On top of that core Bomberman gameplay, Live will give you a ton of ways to customize your matches. Primarily, the game will be chock-full of familiar power-ups, which do things like make your explosions travel farther, increase your movement speed, and allow you to kick bombs you've dropped. You'll be able to control which power-ups (and power-downs) will appear in your matches, whether they can be destroyed by bombs, whether players can pick up the power-ups you've dropped when you die, and so on. You can even control things like the revenge option, which lets you toss bombs from the sidelines after you die, and super revenge, which puts you back in the game when you score a revenge kill. Finally, you'll be able to save three settings presets so you can jump into your favorite match types quickly online.

In addition to the power-up filters, you'll get a handful of special game modes to play. These include paint bomb, which has you coloring in floor tiles with your explosions to score points, and bombing run, which runs at super speed. And eight of the game's nine arenas will also feature unique gameplay elements, including a jungle level with quicksand that will pull you down; a graveyard with trap doors that will take all your powers if you fall in; a space level with transporter pads that will zap you from one side of the level to the other; and a pirate's island level with a treasure trove of power-ups that you have to bomb your way to in the middle of the level. With all the levels and power-up combinations on offer here, along with the online play, it seems like serious Bomberman fans will be able to come back to this one over and over.

As mentioned, Hudson threw Act Zero's gritty stylings out with the bathwater; Bomberman Live is fully back to form with silly characters and whimsical environments. The company hasn't committed to firm release plans or pricing for the game yet, but reps said somewhat noncommittally that it's a safe bet you'll see the game available for download sometime around July at or under 1,200 points. 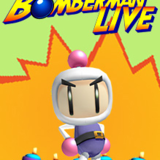