Sea-based games are the theme of the week.

If taking photos of fish and destroying cities tickle your fancy, Xbox Live Arcade has you covered with the releases of Sea Life Safari and Elements of Destruction in Australia this week. Sierra's Sea Life Safari sees players taking photos of 60 different kinds of sea creatures in their natural environment. On the other hand, Elements of Destruction has you destroying human-made environments that are inhabited by the company that just fired you as a lead researcher. Thanks to an atmospheric manipulator that you developed while you were working there, your aim is to take revenge on them with tornadoes, lightning, and other sorts of natural disasters. Each game will set you back 800 Microsoft points.

Xbox Live isn't the only service to launch a sea-based game this week, given that Nintendo's WiiWare sees Cocoto Fishing Master cast out the line. By using the Wii Remote and Nunchuk, players cast out the line and try to hook monsters of the deep. Fishing aside, Gameloft's mobile game Block Breaker Deluxe is also making its way to WiiWare this week. The game is a simple Arkanoid clone in which you use a paddle to break a block wall, one block at a time. Block Breaker Deluxe will set you back 800 WiiWare points, whereas Cocoto Fishing Master costs 700 WiiWare points.

Similar to last week, there are no new PlayStation Network games out this week. However, there is a demo for Dark Sector, which has been banned in Australia, and another for Sid Meier's Civilization Revolution.

To make up for this, three games are getting downloadable content. Everybody's Golf World Tour gets a new Australian-inspired Oceania Resort Course, High Stakes Poker gets a game-variation pack, and last but not least are four new Coldplay tracks for Guitar Hero III: Legends of Rock. The first song, "Viva la Vida," is from the band's new album, whereas "Yellow" and "God Put a Smile Upon Your Face" are from previous releases. On top of that, Warhawk's two existing add-on packs--Operation: Omega Dawn and Operation: Broken Mirror--have been combined into one pack called Warhawk Booster Combo Pack. 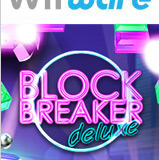