ASTRO's A50 Wireless Gaming Headset Is Expensive, But Worth Every Penny

Nobody's perfect, but the A50 wireless gaming headset is pretty close with a bevy of new features that improve functionality across the board.

ASTRO's new A50 headset boasts wireless functionality across all platforms right out of the box, joining the ranks of Turtle Beach, Creative, and Logitech. There are a few missing features holding it back from perfection, but at the end of the day, it's one of the highest-quality gaming headsets you can buy. 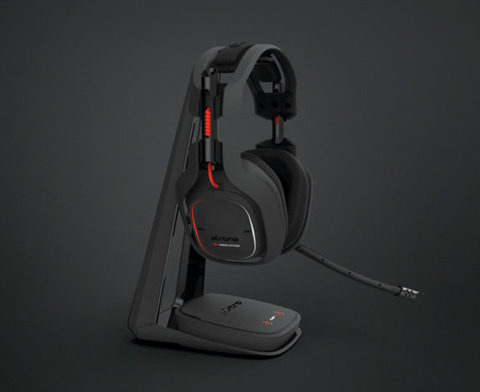 More of an evolution than a revolution, the A50's guts are mostly the same as the A40's, exhibiting minor tweaks to the chassis, but major additions in terms of functionality. Doing away with cosmetic tags, ASTRO decided to go with a completely closed-back design, boosting bass response and sound isolation as a result. On top of refining the audio, the new wireless wonder seamlessly integrates ASTRO's old wireless MixAmp into the right can. This is the biggest advantage the A50 has over the wireless A40's reliance on an external device.

The redesigned Transmitter TX up-scales audio to Dolby Digital 7.1 Surround Sound. You have the option to disable it, but it's a feature we found valuable for listening to music and stereo content in general. For wireless communication, it utilizes Kleernet's 5.8GHz radio tech. This ensures minimal interference from Wi-Fi equipment and portable phones, but it's also the biggest difference from the old Transmitter, effectively crippling cross-compatibility.

Other Kleernet-enabled devices can connect to the A50 headset without the use of the Transmitter TX, but the number of devices under that relatively new specification is quite low, relegated almost exclusively to HP's latest laptops. Continuing one of the best hardware trends at the moment, the base is powered by USB and includes an additional port that can be used to charge the A50s when they aren't in use.

The rechargeable battery packs roughly 10 hours of juice after a recommended five-hour charge via USB. Having an internal battery presents certain advantages, but it also means you are at the mercy of its finite life span. Like with all batteries, the ability to "hold" a charge degrades over time, and once it has run out, you're left with two choices: string a USB cable from your headset to an open port, or send your A50s in for servicing. There's no word on the A50's real-world life span in this regard. Surely, anything less than a few years is bound to frustrate customers, and in turn, ASTRO support.

In case you need to pass the audio signal to another device, you're restricted to optical output; there is no 3.5mm pass-through. This is a noteworthy exclusion because it prevents you from using the A50s in a wired fashion. True, you can connect the USB cable in the event the battery dies, but you are still receiving a wireless audio signal. With this in mind, the A50s do not fall within current MLG regulations. When you consider the prevalence of the A40s among competitive gamers, it's confusing to see such disregard for their strict adherence to hardware standards.

ASTRO implemented a new EQ preset system for the A50, which at the moment is limited to three preloaded configurations. It has stated that a complete software-based customization solution will appear in the near future. When exactly is anyone's guess, but considering Turtle Beach and Creative have products on shelves with this functionality out of the box, it would behoove ASTRO to release its solution in a timely manner.

The first built-in preset, "ASTRO," represents the manufacturer's ideal settings, perceivably ramping up the bass and down-tuning midrange frequencies. "Core" seems to be the baseline EQ preset, reproducing native bass, mid, and treble response as dictated by the audio source. Finally, the "Media" preset boosts the low- and high-end frequencies, leaving the midrange well enough alone to serve as the metaphorical glue, balancing out the two extremes. 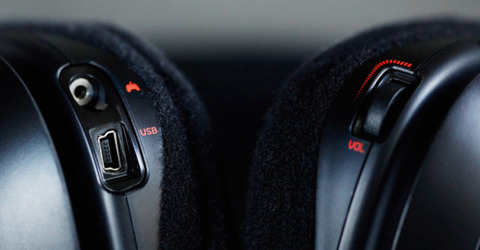 Truthfully, there may not be another gaming headset as comfortable as the A50. A near solid weekend of use proved not only bearable, but damn-near addictive. The memory foam and cloth-like materials used for padding conform to your skull's unique form, allowing just the right amount of ventilation while maintaining a satisfyingly snug fit. Even on "large" heads, the A50s never apply an uncomfortable level of pressure. After a few hours of use, they begin to feel like an extension of your ears, and their presence becomes something of an afterthought. You can adjust the vertical position of the cans in relation to the strap, and since they float within their bracket, it's easy to find an adjustment that suits your particular needs without too much fiddling or experimentation required.

The A50's soundscape is robust and detailed, rivaling the best gaming headsets on the market. Bass rumbles and nuances come to life with no sign of distortion. The new closed ear design brings improved bass response and sound isolation, as well. To ASTRO's credit, in the absence of a high-end surround system, the thought of watching a movie or playing a game without the A50s begins to feel like a compromise. The virtual Dolby 7.1 Surround Sound so convincingly reproduces the sense of orientation and space of an actual room that you'd be forgiven for mistaking the A50's audio for your TV or sound system, at first. More than a means of shielding others from your media, they're a huge step up from average home theater setups. 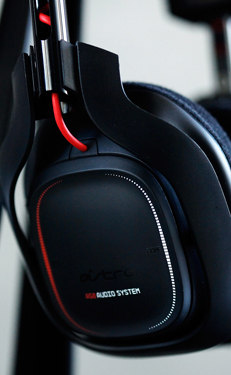 The boom mic is flexible and functional, boasting a noise-canceling auxiliary mic on the outside. Though you can't remove the boom, you can swivel it out of the way when you aren't using it. Doing so also disables the mic, forgoing the use of a traditional button. Sound quality is clear and crisp and was devoid of noise or interference during our testing. Voice data on the PlayStation 3 and PC is handled via the USB connection to the Transmitter, while the Xbox 360 requires a direct connection between the A50 and the controller.

Now that the MixAmp is within the headset, ASTRO had to integrate volume and game/voice balance controls into it as well. A dial located on the back of the right can adjusts the volume. A rocking button, comprising the entire back of the can, adjusts the balance between in-game chat and gameplay volume. Thankfully, holding the toggle gracefully scales the balance; there's no need to repeatedly peck away at a button for fine adjustments. The series of beeps indicating when you've reached a balance threshold is a useful and thoughtful detail as well.

Above the volume dial on the rear of the right can are the preset switch and power button. Both of these controls are quite small and slightly obscured by the can's harness. This becomes a problem only while wearing the headset since you have no visual reference when feeling your way around. Powering the headset on or off is confirmed by a brief chime similar to the balance notifications.

There are a few missing features that prevent the A50s from dominating the competition. Bluetooth is one, and though it drains batteries, its integration is on the rise among the competition. It allows you to answer phone calls midgame and listen to music (with A2DP support). It's also one of two methods for enabling chat on the PlayStation 3, the other being USB, which the A50s utilize. Beyond those applications, the protocol is used to great effect in Turtle Beach's Earforce XP500 to wirelessly transmit chat data on the Xbox 360 via an adapter that connects to the controller's mic input. Since the A50s lack such capabilities, you are forced to use the included cable to connect the headset to the controller, as mentioned earlier. It's not a damning compromise, but it's not a perfect solution either.

Finally, the first thing everyone is bound to notice is the price tag. The cost for the headset and the transmitter comes to $300. This makes it the most expensive package in its class, a fact that is likely to scare away a few potential customers. It's not without warrant to be wary of big numbers, but the A50s exude quality through and through. The fact that features found on cheaper sets aren't present is worth considering, but it doesn't tarnish the A50's accomplishments. It's easy to recommend it once you've spent an hour or two basking in the joy that is interference-free wireless surround sound.

Traditionally, ASTRO's independence meant it was next to impossible to try its products before forking over your hard-earned dollars. Now that ASTRO is owned by Skullcandy, expect to be able to test the A50s out at major retailers in the near future. It may be the most expensive gaming accessory you ever purchase, but then again, it may also be the best one.