Last week, leaked promotional materials forced Ubisoft's hand in confirming the first few substantive details of the multiplayer-enabled Assassin's Creed: Brotherhood. Due out for the Xbox 360, PlayStation 3, and PC this holiday, Brotherhood picks back up with Assassin's Creed II protagonist Ezio, who will take on the Templar order in Rome.

As promised, Ubisoft today delivered more information on what gamers can expect from Brotherhood when it ships later this year. The game's single-player component sees Ezio assuming control of an assassins network, commanding the combined effort to rid Rome of its corruption and the Templar order. Ubisoft notes that players will lead "an entire Brotherhood that will rally to his side," which will complement the series' hallmark free-roaming action.

In the multiplayer mode, players will apparently be able to align themselves with the pharmaceutical company Abstergo--which kidnapped the series' contemporary protagonist Desmond--and aid the Templar order. The publisher went on to note that players will be afforded a range of characters to choose from, each of which bears his or her own signature weapons and assassination techniques. Brotherhood's online component will also include a variety of different competitive modes.

On the Assassin's Creed: Brotherhood Web site, the publisher has posted a handful of examples of the kinds of weapons players will be afforded in the game. These include an axe, a syringe, a fan, a claw, and a dagger. The site also notes that gamers who preorder Brotherhood through GameStop will receive the exclusive Harlequin character for use in the game's multiplayer modes.

Ubisoft's massive Montreal studio has been charged with leading development on Assassin's Creed: Brotherhood. However, the Canadian outfit will be supported in its efforts by Ubisoft studios in Singapore, Bucharest, Quebec City, and Annecy, France. 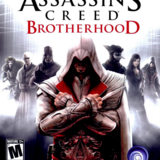