We hop inside a Bugatti Veyron and take this arcade racer for a spin.

If you can remember all the way back to November of 2004, you might recall an original DS launch title by the name of Asphalt: Urban GT. This arcade racer earned itself a nice little 7.5 rating from GameSpot, marking one of the few quality releases during the modest launch of the original DS. Now, the series is back for the launch of the 3DS, amidst much more third-party competition. Here at Nintendo’s New York 3DS media event, we’ve just had the chance to play the game and see how it’ll stack up against other games slated to arrive alongside Nintendo’s new 3D handheld.

Who's Making It: Asphalt 3D is being developed by Gameloft, a company that’s worked with traditional handhelds before (including the aforementioned Asphalt: Urban GT), but it has recently found terrific success developing for the rapidly growing iPhone game market.

What It Looks Like: Aside from the ridiculous amount of nitro boost pouring out of your car when you hit the turbo button, Asphalt 3D has a pretty realistic look for an arcade racer. You can chalk that up to the fact that it’s got more than 40 licensed vehicles from Lamborghini sports cars to Ducati motorcycles, as well as 17 tracks set in real-world cities, such as San Francisco and Paris.

How It Uses 3D: It’s hard to really pick up on the 3D visuals when you’re playing the game because everything moves by you so quickly, but once you slow down, you can get a better sense of how Asphalt 3D uses this newfangled technology. Specifically, you can jump into the Garage mode and ogle, say, your Lamborghini Murcielago or your Bugatti Veyron as they spin around on an elegant podium. As one neat little feature, you can use the 3DS motion-sensing gyroscope to move the system around, which also affects the camera angle your viewing the car at in Garage mode.

What You Do: Asphalt 3D is a pretty basic arcade racer where the rubber meets the road, but there are quite a few different game modes and other various features.. Among the eight different game modes is Vigilante, an elimination mode where every so often the last-place racer is cut from competition, and High Speed Chase, a Need for Speed-inspired mode where you have to outrun the cops. Ubisoft tells us that the career mode will last about 18 hours, giving you the option to customize your new rides along the way with a decal editor.

How It Plays: Asphalt 3D controls well enough in terms of car handling, but we had a problem with the way controls are mapped. Basically, you hit the A button to accelerate, B to brake, R to use any nitro boost power-ups you’ve picked up on the track, and L to switch camera views. In our experience, rolling your thumb around to switch between braking and accelerating was a little awkward--we’d much preferred to map the brake to the L button to give our thumb the chance to sit tight on the gas pedal and alleviate those awkward micro-movements you need to brake. Unfortunately, there’s no alternate control option to do so that we could find. But aside from that little issue, Asphalt 3D controls fine, allowing you to maintain a pretty good control of your car even when going full throttle on the turbo.

What We Say: Aside from slightly awkward control inputs, Asphalt 3D looks like a solid if unspectacular arcade racer. Nothing about it really seems to be pushing the genre forward, but it nonetheless strikes us as a well-made game with a number of different features to maintain your attention. We’ll see how the final product turns out when it’s released shortly after the 3DS. 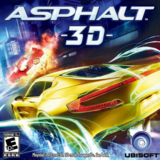