Army Men: Air Combat is, in actuality, Army Men: Air Attack slapped with a new title and ported to the N64. See what makes the N64 version worthy of a name change.

Army Men: Air Combat is, in actuality, Army Men: Air Attack slapped with a new title and ported to the N64. Since this game is not a sequel to Air Attack, it's a question as to why 3DO changed the name of the game, as playing through the first few levels of the game left me with the feeling that not much, if anything, has changed.

Army Men: Air Attack, as you may recall, was a 3D mission-based shooter set in 3DO's world of plasticene strife. In it, you play the role of a noble Green chopper pilot whose job it is to foil the vile Tans in whatever way that's pertinent to the mission. While the game's mechanics were solid, and very intuitive, the general redundancy of the missions undermined any sort of prolonged enjoyment of the single-player game. Opinions seemed to go both ways regarding the game's graphical quality: Some praised its nicely detailed, interactive levels, while others complained about the poorly detailed in-game models.

Army Men: Air Combat, in truth, seems to deviate only slightly from the path blazed by its earlier incarnation. Since the first few missions parallel the ones in Air Attack, we can assume that the later missions will follow suit. The only real difference I found was that 3DO had added a new side-gunner - a female Green named Felicity.

For those who've played Air Attack, rest assured that very little seems changed, as far as gameplay goes. The choppers still move in all directions via the analog stick, though they now strafe with the use of the C-buttons - a notable improvement over the PlayStation's shoulder-strafe scheme. The up/down C-buttons activate the map and scroll through weapons, respectively. The Z-button activates the machine gun, while the A and B buttons operate the secondary weapons and the winch. While all the elements that made Air Attack decently solid remain (such as the solid control scheme, the thoughtful interactive elements, and, of course, the winch-drop combat), the graphics have, at best, remained static. It seems that, at this point, many of the vehicles (particularly the blue units) have suffered considerably when compared with the PlayStation's models. When carefully examined, they seem overly bright, blurry, and often of an indiscernible shape. The winch-able objects also seem to be rather haphazardly sculpted. Whether this is just a kink in the porting process or a symptom of the N64's hardware has yet to be determined. Whatever the case, the game is scheduled for release on July 7, so if there's any cleanup to be done, it had best happen fast.

Army Men: Air Combat will provide N64 owners with an infusion of plasticene air-to-ground warfare, whether or not they want it. Let's hope 3DO can polish up the questionable elements and add some cool features, as the core of the PlayStation version, in the end, wasn't half bad. Keep your eyes on this space for a full review in July. 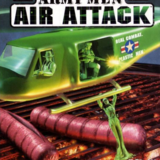