The push for realism in military games also makes them useful to propagandists. 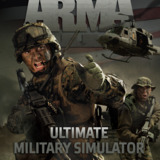 In September 2011, British broadcast station ITV ran a historical documentary called Gaddafi and the IRA. Included in the documentary was footage that purported to show a 1988 attack in which the Irish Republican Army shot down a British helicopter, using weaponry purchased from former Libyan prime minister Muammar al-Gaddafi. But it was revealed shortly afterward that the footage ITV used was not of a real conflict--it had been sourced from popular PC military simulation game Arma II.

If you skip to 00:36 in the above video, you'll see a sequence in which anti-aircraft heavy artillery is used to take down a helicopter. "With Gaddafi's heavy machine guns, it was possible to shoot down a helicopter, as the terrorist's own footage of 1988 shows," explains the narrator.

It's important to note that a Lynx helicopter really was shot down by the IRA in South Armagh--part of Northern Ireland--in 1988. However, it was not the same helicopter as the one constructed with programmed code in the Arma II footage.

Although ITV's use of video game footage in a documentary became a news story of its own in 2011, most of those stories didn't address the underlying problem: that a TV station had mistaken a game for history (or worse, used it on purpose). A significant amount of coverage focused more on the absurdity of the situation than on its gravity on a wider scale, and even less--if any at all--considered the phenomenon from an Irish perspective. This was a British documentary intended for a British audience, and its significance was trivialized in reports because it was not deemed sufficiently dangerous for rigorous investigation. The country it attempted to demonize was outside of its planned circulation, and was therefore left by the wayside as the offense faded into obscurity.

Misremembering what happened indirectly enables the media to get away with passing video game clips off as real footage.

For Irish people, however, this presented--and still presents--a major problem. Irish/English tensions have always existed across history, with Ireland having spent centuries under an oppressive England's thumb. This is taught to primary school children from about the age of 10 in Ireland. It's not even on England's curriculum, where history syllabuses attempt to hide the country's imperialistic past. And so, a documentary using falsified footage is not just a potential counterargument for viewers--it is the entire narrative with which they become acquainted, and sparse, frivolous coverage of the event's gravity ensures that it is not sufficiently well-documented as to be remembered as fake. Misremembering what happened indirectly enables the media to get away with passing video game clips off as real footage--obviously, that is a major problem.

It's important to note that the IRA was a terrorist organization, and a helicopter was shot down in 1988. I am not arguing against those two irrefutable facts--instead, I argue that it is actively harmful to fabricate footage and pass it off as admissible historical evidence.

The video above--which was captured by a viewer and posted after ITV removed the documentary from its digital player--proceeds to display the original fan edit of the Arma footage. It is radically different from the clip shown in the documentary, mostly because it's quite clearly a game. Freeze-frames and a distinctly gamified palette categorically demarcate it from a live-action film sequence--even one recorded with 1980s equipment--while the drastically hyperbolic explosions indicate that even realistic simulators often indulge in sensationalized visual embellishment.

It is therefore evident that the black-and-white filter applied to the heavily-trimmed and -edited clip shown in the documentary was intended as a means of legitimizing the incident and creating a supposedly true narrative around it. The potential for falsified clips to be presented as historical documents in official repositories is scary, especially given the jump in realism we've seen since Arma II, and the fact that a substantial number of viewers were willing to take the clip at face value in 2011.

Numerous other viewers did notice discrepancies in the footage purported to be a legitimate film of an IRA attack, however, prompting UK communications regulator Ofcom to investigate the documentary's production. As reported by The Guardian, ITV officials told Ofcom that the misused footage was included as a result of "human error" caused by the "pressure [staff] were under in meeting the deadline for the programme's completion, delivery and broadcast."

Still, Ofcom maintained that this was an unacceptable appropriation of video game footage as a falsified historical document. "As such this represented a significant breach of audience trust, particularly in the context of a public service broadcaster," reads the Ofcom query. "Ofcom considered the programme to be materially misleading."

In May 2019, almost eight years after the documentary originally aired, I thought it was worth digging deeper into the controversy. In a world where Deep Fake videos have been trivialized to the extent that you can impose your own face on a GIF of a fictional character, it seems absurd that an event as dangerous and disingenuous as this can not only be passed off as a funny mistake, but be completely forgotten--especially given its nature as an incident that is damaging to both national viewer trust and English-Irish relations. On one hand, we treat pseudo-realistic tech as a means of telling innocuous jokes, but on the other, it becomes terrifyingly easy to strip away said innocuousness to present a false narrative as true. To build on this, Irish history--and certain more damning aspects of English history--are often suspiciously missing from the curriculum in English schools. Students are already shown only parts of a full picture--incidents like this make the reality of perpetuating that structure scarily feasible.

Although media interest in the phenomenon was fleeting, the ITV documentary's pretense is at least relatively well-documented today. For the above reasons, however, it continues to present a larger issue when considered alongside the possibility for similar aberrations to influence people with insufficient education on certain historical periods.

Students are already shown only parts of a full picture--incidents like this make the reality of perpetuating that structure scarily feasible.

In order to learn about how and why this happened--and if it does, in fact, continue to happen today--I contacted Arma II publisher Bohemia Interactive last year. I have been slowly but surely looking into similar cases to analyze the extent to which radical misuses of fictional footage occur, and what that means in the grand scheme of realistic military sims being presented as real military conflicts.

This wasn't the only case in which Arma II's palpable graphics have been wrongfully employed as propaganda. According to Bohemia Interactive public relations and brand manager Korneel van 't Land, "There have been a few instances during the past few years" in which Arma II has featured in documentary narratives. And it's not just Arma footage that occasionally gets touted as evidence of real events in news coverage.

Here are some examples: In February 2019, Arma II gameplay made the rounds on social media as purported footage of an IAF air strike on Balakot, Pakistan. A month later, Arma 3 footage was used as part of a State-sanctioned tribute to the Russian military. It's worth noting that prior to this, Russian news stations broadcast "irrefutable evidence" of the US government secretly supporting ISIS, which ultimately turned out to be footage from mobile game AC130 Gunship Simulator.

In a less harmful but nonetheless absurd instance, the BBC accidentally applied the UNSC logo from Halo to its anchor backdrop when airing a UN broadcast. As you can see in the images below, the United Nations Security Council and the United Nations Space Command logos are not exactly the same.

Although this might not be as misleading as the other instances documented above, it still displays the relative ease for crew members to accidentally--or, in some cases, consciously--use video game development technology to present fictional narratives as reality.

All of this becomes especially prominent when you consider the measures Bohemia takes to continue improving the simulator's realism. When asked about the studio's methodology, van 't Land told me that Bohemia conducts research, works alongside military consultants--both active and retired--experiments with real-life equipment on firing ranges (including literal tanks), and consults Bohemia Interactive Simulations (which shares the same name, but is a completely different company).

"We believe it makes for an interesting niche sim-game that explores a complex and universal human topic," van 't Land said. "It also allows for virtual (soldier) roleplay, while still highlighting the dark sides of war, and the complexities." Van 't Land pointed to the Laws of War DLC as an example of this.

But it is not highlighting the "dark sides of war" in virtual space--it is being used as a substitute for real depictions of war in the media landscape, and has appeared in more than one instance.

"We were definitely aware [of the ITV documentary], and from what I understand, there was even some 'apology' from ITV in this particular incident," van 't Land noted, after explaining that he was not part of the Bohemia team when the footage originally aired. But an apology rings hollow when the stakes are this high--it does not undo the attempt to mislead people on a history they are already not taught in full, and actively facilitates the danger of resuscitated conflict in future.

This happened nine years ago. However, it also happened three years ago and occurred on more than one occasion a year after that. It is at least partially reasonable to assume that other cases have also transpired but were not picked up by the media. That is why it is actively harmful to forget these incidents or to treat them absurdly hilarious mishaps. It is necessary to remember ITV's blunder, and all of the blunders that came after it--some of which were likely intentional. Otherwise military sims will continue to flaunt their realism, and propagandist documentary makers will continue to adapt said realism for their own historiographical gain.

Optimize Your Mobile Gaming Experience With This Gamepad Controller

Fortnite Season 8 Secret Skin - When And How To Unlock

2021 GOTY Contender Deathloop Is A PS5 Game From An Xbox-Owned Studio, And That's Weird