Arise Is A Beautiful Collision Of Music And Emotion

Arise: A Simple Story mixes the beauty of Disney's Fantasia and the emotion of Studio Ghibli films with a sprinkling of platforming. 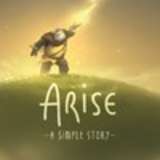 Piccolo Studio in Barcelona, Spain was founded by three partners who've known each other for 20 years, and in 2019, they're releasing their first video game, ever, Arise: A Simple Story. For two decades, the partners ran successful interactive ad campaigns for global brands like Coca-Cola--but that corporate lifestyle grew stale.

As the team puts it on their website, "We were making money and winning awards, but it wasn't fulfilling. Making video games [has] always been a childhood dream, so we went for it. Starting from scratch in a risky industry was a leap of faith, but we were looking for that missing spark in our lives. If you fail, at least fail doing what you like."

Narrative designer Alexis Corominas says he wants to be able to look back, remember, and be proud of the work he's done. That mentality is reflected in Arise--the game begins with the death of an old man, who reawakens in limbo. From here, you'll explore 10 different memories from the man's past.

"Every level of the game is dedicated to a single feeling," Corominas explains. "If you connect all the feelings in the game, it's like a roller coaster of emotions. These are universal feelings. The goal of the game is to touch people."

Levels play out without any dialogue--music swells as you platform through various setpieces, but characters from the old man's past don't speak to one another. Arise focuses on emotions rather than story.

Of course, Arise is still a game you play. The old man can run, jump, and use his grappling hook to swing from various points. But Arise's central mechanic is the ability to scrub through time. Some levels let you move between morning and night, while others stretch out across full seasons. In all cases, moving forward or backward in time changes the level around you, as animals, objects, and platforms shift over the course of minutes, hours, and days.

One stage (seen in the gameplay above) had us leaping across giant sunflowers. The flowers follow the sun across the sky and tilt as the day progresses, allowing us to change the angle of the flowers as we leaped across gaps. The same stage had a handful of snails that would slowly move throughout the day, letting us hop aboard their shells to reach higher platforms.

The goal of the sunflower level is to chase down a kite that belonged to a friend from the old man's childhood, representing a happier time in his life. The following level (also seen in our gameplay video) is not so joyful: a mountain range slowly ripped apart from the center, forcing us to rewind and bring cliffs back together as we make our way to the summit. In the end, the reason for the schism was made clear: that same childhood friend was going away, leaving the old man on one side of the divide as his friend was pulled away, both literally and figuratively.

This reflexive level design is accompanied by an art style reminiscent of Tequila Works' Rime. That checks out, as Rime's art director Jose Luis Vaello is also the art director for Arise. Vaello's work is inspired by Disney's Fantasia and the "Disney of Japan," Studio Ghibli. It's a good match for the game, as it's levels are focused on emotional moments rather than plot points.

Arise: A Simple Story releases on December 3. It's headed to PS4, Xbox One, and PC via the Epic Games Store.

Tony makes videos for GameSpot and occasionally writes a word or two for things like this. Yes, he will be your friend.