All the Bandai Namco News Announced Today in One Place

Here's all the news about JoJo's Bizarre Adventure, Tales of Berseria, One Piece, and more.

As part of the Jump Festa event in Tokyo this week, Bandai Namco made a number of announcements about franchises like Mobile Suit Gundam, JoJo's Bizarre Adventure, and God Eater, among others.

Here's a roundup of all the big Bandai Namco news from the show: 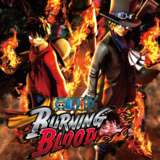