We take a look at the Windows Vista games that will be responsible for countless hours of wasted productivity through the end of the decade.

The expensive games usually get all the attention at GameSpot, but we wanted to take a look at the Windows Vista games that will be responsible for countless hours of wasted productivity through the end of the decade. Windows Vista's updated DirectX 10 API promises to give us better-looking and better-playing games by allowing game developers to get more performance out of the PC system, but Vista isn't only going to help improve those $50 games. Microsoft will update Windows's collection of casual games, which includes old standbys such as Minesweeper, FreeCell, and Solitaire, and Vista will also introduce completely new games including Chess Titans, Mahjong Titans, and Purble Place, which are designed to appeal to a large, global audience. 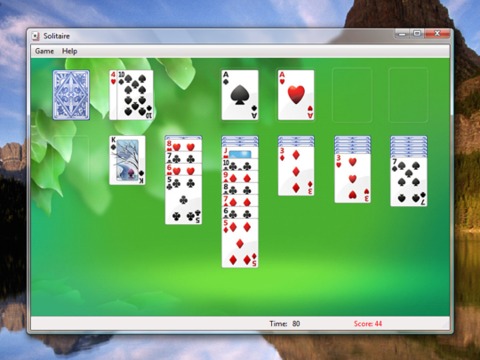 The Windows team decided that it was time to overhaul its game collection by updating the user interface and unifying the design style to make the games worthy of the new AeroGlass desktop theme. Solitaire offers the same core gameplay mechanics that we're accustomed to in the current version, but it also has new graphics and supports Windows Vista's new Games Explorer display window, which features game box shots and vital stats such as publisher, developer, and ESRB rating. 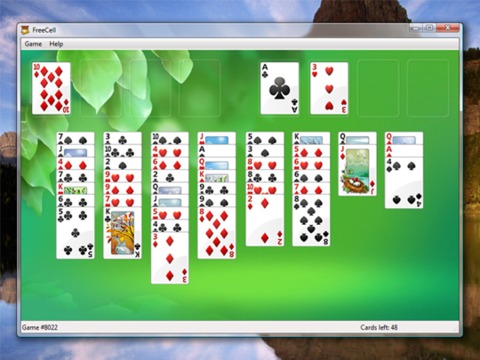 FreeCell also has a new look, but the game still retains the core gameplay first introduced to players in Windows 95. One major change in the Vista version is a new "undo" command that lets you take back moves, which you can abuse to go all the way back to the start of the game if you want. The undo function appears in several of the other card-based games, as well as Mahjong Titans and Chess Titans. 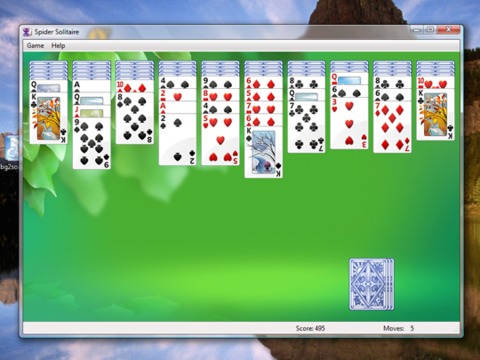 Vista breaks out two 3D card decks for Spider Solitaire. Select your difficulty level and take advantage of the new "hint" option if you get stuck. Many of the games feature a hint option that will highlight open moves for you to take in case you get stuck. Using hints in Spider Solitaire will make sure you've exhausted all of your options before dealing out another layer. 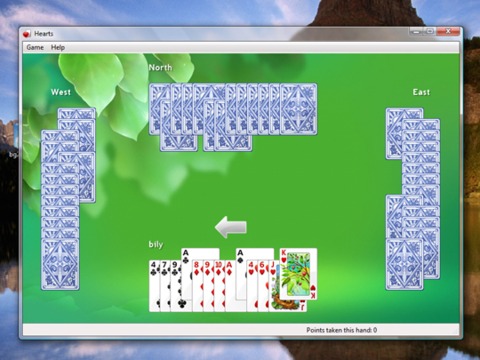 Pass hearts to other players and avoid the queen of spades at all costs. Be careful when you attempt to shoot the moon (gather all the hearts and the queen of spades)--the undo menu option isn't available in this game. Microsoft is working with casual-game developers to help them produce high-quality games that users will expect to see on the Vista platform. Hearts has a polished look and, like the other Vista games, offers robust saved-game options and advanced game statistics. 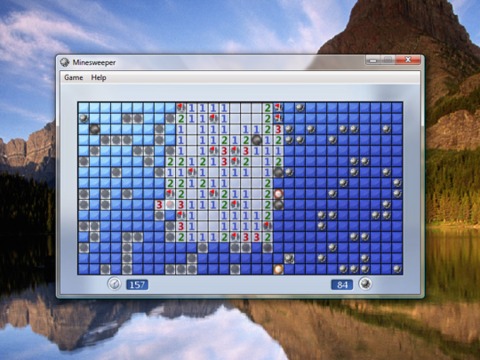 Minesweeper is largely the same, but the new animations add some excitement to the desktop classic. Now when you accidentally uncover a mine, the game reveals all the remaining bombs and detonates them sequentially starting with the closest mines. The whole explosion sequence is much more dramatic than the simple unhappy face we get in Windows XP. 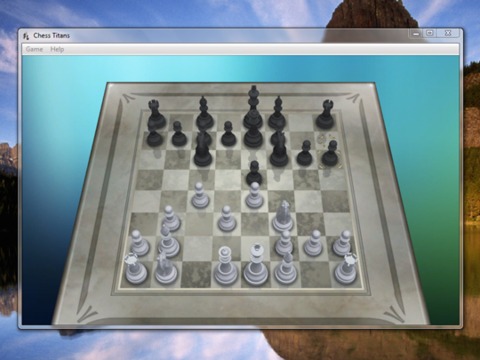 Chess Titans, a 3D version of the classic board game, joins Solitaire, FreeCell, Minesweeper, and Hearts to form the core of Windows Vista's casual game collection. The game's 3D display angles show off the beautifully rendered chess pieces. You can play against a human opponent, or the computer, which can be set to 10 different levels of difficulty. Chess Titans is a great game, but it has one major catch: It doesn't come in the Home Basic version of Windows Vista. You'll have to pony up the extra bucks to get a Home Premium, Business, Enterprise, or Ultimate edition of Windows Vista to get Chess Titans. 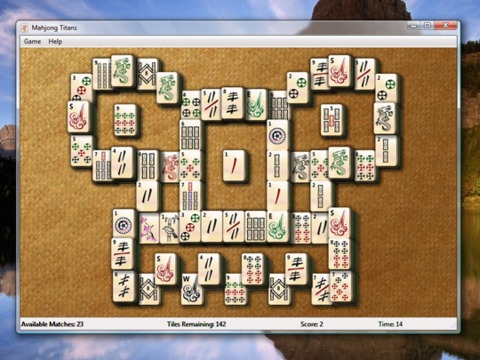 Mahjong Titans is based on the Mahjong solitaire tile-matching game, not the four-player gin-rummy-like game played in many Chinese and Jewish-American households. The game offers six different game layouts, with tiles spread across the table several layers deep. The goal of the game is to remove all the tiles from the board. Match two exposed tiles to remove them from play. Exposed tiles have empty space to the left or right and mostly lie along the edges of each layout. The rules are fairly basic, but there's strategy involved in selecting which tiles to match. Poor decisions could lead to locked boards without any available matches (that's when you use the undo option). As with Chess Titans, Mahjong Titans is only available in the non-Home Basic versions of Vista. 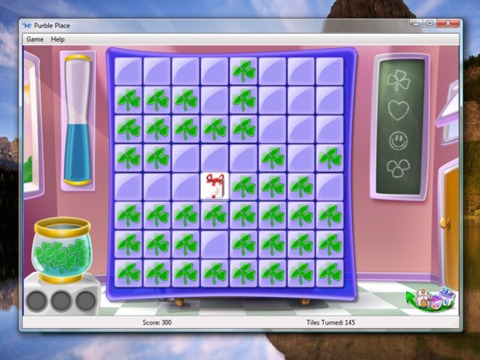 If you're an elementary-school-aged child whose likes include cakes, matching games, basic pattern recognition, and practicing the process of elimination, then Purble Place is the Windows Vista game for you. The game consists of three minigames--Purble Pairs, Comfy Cakes, and Purble Shop--that all share the same nonthreatening Purble visual style.

Purble Pairs is a basic memory game that has you matching tiles on the board. However, the game adds some twists with special tiles that modify the board or grant bonuses when matched. You can also earn "sneak peek" tokens that let you view the entire board for a brief period of time. Comfy Cakes puts you in a high-pressure cake production line where you have to build cakes to order. If you fail to produce a perfect cake, the head Purble will chastise you and force you to try again. Fail three times, and you'll lose the game for wasting ingredients. Purble Shop is a guessing game where you have to figure out what a hidden Purble looks like. Match features such as eyes, nose, and mouth to win. The more advanced version adds more colors and features but doesn't change the fact that you don't really care what the Purble looks like. 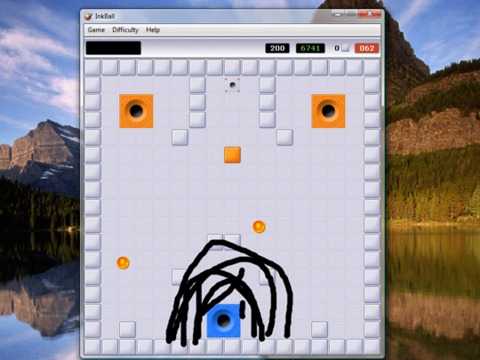 InkBall, originally released for the TabletPC, makes its way over to the desktop in Windows Vista. However, be aware that the purpose of the game is to teach tablet users how to use the touch screen and stylus control scheme. After struggling to play through advanced levels with the mouse, we can see why Microsoft is only including InkBall with Vista versions that have tablet support.

The game consists of a square grid that's walled off on all sides. Each grid has an entry point where balls of various colors come into play, as well as exit holes and obstacles such as walls and blocks. The balls themselves will bounce off walls, each other, and any "ink" lines you draw onto the grid. The goal of the game is to sink balls as quickly as possible into the correct holes to score points. The game ends if you sink a ball into the incorrect color hole or when time runs out.

There are 478 comments about this story
Load Comments (478)