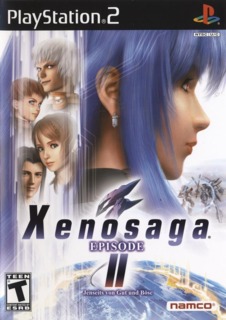 Unbalanced, yet with compelling story!

User Rating: 7.5 | Xenosaga Episode II: Jenseits von Gut und Bose PS2
By DarthLefein | Review Date: July 13, 2010
Alot of reviews have been given for this game as "REALLY BAD." I'm one of those people who lets things slide. I'm a big RPG gamer. If you're just looking for fighting in a game. Stay away from this one. This needs alot of role playing consciousness. It has a FANTASTIC storyline (surperior to alot of other RPGs), but the game should have been a movie if you ask me. This game goes back to the past, alot of flashing back and forth and alot of surprises. On "The Trio" as I would say. Jr. Albedo and Gaignun. Don't worry about other characters. They're not as important here. But don't let that get you down.

It summerizes everytime I turn the game on to back where I left off, (loading from memory card) so that should help people who dooesn't game much. I couldn't understand why people wouldn't get the storyline if the UMN at the beginning of the game allows a feature to review what has already happened. I'm guessing people are giving irks about that.

I would probably complain about the voice actors and battle system, alot of people would probably say the same thing. I do not mind KOS-MOS' voice actor as much as Shion and chaos. chaos (Yes no caps) is too stoic for me, after playing Xenosaga I (over and over in order to get his character down, hey he's not human!), I'd say he doesn't add much to the action in the beginning where all the cool fight scenes are. The beginning of this game, IS AWESOME. Yes AWESOME. (Voice actors killed it.)

Shion, I would say, is a mess, her attitudes and momentum throws me off everytime a new situation becomes bad. How can she sound so perky all the time? I would definately go with the voice actor in Xenosaga I if I were to choose between the two. And the old voice actors are wonderful as always, Albedo, Jr., Gaignun, and Captain Matthews. Yar they're the same.

The battle system, yes it's a pain. You're not actually fighting. You spend most of your time "stocking up" and letting your enemies rag doll you most of the time. Stocks are like AP in Xenosaga I, except you can only add one stock each turn, or use an ether "Stock 1" to add a stock to another character. After you attain a certain amount of stocks you are presented a number of combo options. The more stocks, the better combo. It becomes an issue because I would have to run around and train in the same area in order to get enough levels or TM points (in order to get Medica All, it becomes valuable, trust me.) I was hoping that this game system would take a tiny bit from Final Fantasy X (because you can to switch characters in battle) however, unlike FFX, this only allows share of spoils (TM points EXP etc.) to the remaining three characters standing in battle. It becomes a real disadvantage if you have characters that have some abilities, but not others. (Medica, Revert, Refresh, etc. although they all have the same abilities to learn, such as Psycho Pocket.) I would suggest picking three main characters and if you do have a strategy guide, ignore the character reccomendations. I chose to maintain Jr., KOS-MOS, MOMO, or Ziggy. (Robotics addict.) Unlike Xenosaga I, tech attacks are only avalible with doubles. So say you have KOS-MOS and Shion, if you have the key for the ability Double X-Buster with a boost and a certain amount of stocks, you can do a tech a attack. Once per battle.

Also, alot of people are confused about "break zones." It's hard to explain in words, there are tutorials in the game. But it's something so that you think you'll always have to rely on combos. It's like suppose you have an enemy with a break zone of B, A.
On your controller there's a:

Those buttons represent letters. Characters have combos accordingly to the buttons you press. So you attack with Square and O. Then their zone is broken. You give more heavy damage by following the character with O buttons for "break bonus" this just means you successfuly broken through their break zone and you are currantly giving more than average damage.
This all comes down to your characters. Characters have different combos. It's much more simple to play it rather than explain it. There's more to it though. Battle slots are still there, and a few more quirks.

A few notes:
Jr. - A bit weak. He doesn't have a lot of enemies that has a weakness for him. But I use alot of skill upgrades so that he gets to make quick work of Albedo.
KOS-MOS - She's super strong against Gnosis. (Fitting of course.)
MOMO - She's a super valuable asset. I use her ALOT. Her ether bow kills.
Ziggy - He's good against anything. Like bosses.

Another battle system irk is the "Move" command. I use that command to do efficient back shots. But the stupid thing is that if I move to the other side, my character is facing his/her back towards the enemy. Then I'll have to wait next term to attack in order to make her face the enemy. (Confusing ya.)

Speaking of areas, the maps are smaller compared to other games I played, so there's fewer enemies to bash. A bit convienient but gets tiresome if you're trying to get treasures around the block. The UMN encephalon has changed. Now you don't have to worry about exiting through a plate. Just start menu and exit. But I really hate knowing that two disks can only contain about 30 maps. It goes by fast. I mean, really fast. Before the first disk was over I was halfway through the stradegy guide. (And I don't usually buy stradegy guides.) The only things that are making the game longer are the GS campaigns, I'd totally reccommend that you do it or else you won't get all the nifty stuff that would make gameplay a bit more "exhilerating." Like double tech attacks and all those other cool items. (Believe or not I haven't used any item in the game yet, not even a Med Kit.) I'm a thrifty person, knowing that there is no currency = no shops. And I hate the puzzles in this game. It gets on your nerves eventually. Even little tiny puzzles.

The maps are beautifully rendered. One thing I'm ticked off about is that there's no radar. You just have to wait to be ambushed unless you memorize every quirk in the area (which doesn't take a lot since you eventually visit the maps over and over.) Sometimes you can't even smash the traps before the enemy ambushes you.

Although I can't say the same for the characters, even though it's become all realistic, it's become too femme for me. KOS-MOS' new design throws me off, and that's why I put the bathing suit on her for battle, Shion is also a bit femme for me. But I would totally think guy gamers would fall for them eh.

I would also say the same for the guys, they grown cuter, but I still am not pleased with the new character design after I played it.

E.S.s I almost forgot about that. (I was reading other reviews.) Piloting the E.S. is like the A.G.W.S. only more bulky and cooler. The thing that pissed me off for the E.S. is that it's slow on the maps. No matter which E.S. you chose, Dinah, Zebulan, Asher. It's slow. Pathetically slower than the human lead characters. I would love it if they had more abilities and hope that they STOP STOCKING UP. I almost died because half-way I did not have Zebulan (that's the only E.S. that can use ether = heal). But I love the E.S. Much more detailed and beautiful things than the A.G.W.S.

Music is a bit more techy. Very techy. I don't like most of the soundtrack. Gives me a headache. I love orchestra, but that's me. (like Chrono Cross, FFX, and Xenosaga I etc.)

Three stars, it's not the living saga, there's not a "true game" thing going on. Not enough for me to play over and over. If you're into SCI-Fi storyline, random philosophies, techy mechas. (Like me) This game would probably love you. But not as much for me. (And I ain't no star wars fan but I'm loyal enough to keep Xenosaga as my favorite RPGs)
Load Comments (0)