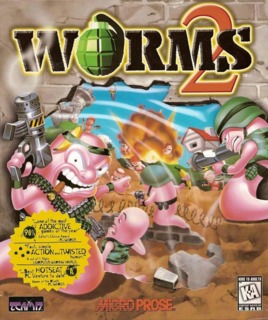 I found the Concrete Donkey!

User Rating: 9 | Worms 2 PC
By SZeroC | Review Date: December 20, 2005
Speaking purely from an evolutionary perspective, the worm gets no respect. Earthworms (or should I say, Annelids) occupy one of the lowest rungs of the taxonomic hierarchy (squished right in between those wily Placozoans and the up-and-coming Rotifers...). People often mock the worm, taunting it with cries of "Stupid Oligochaeta, you'll never have any thumbs! Here, catch..." And even though the worm is nature's greatest recycler, it often gets gypped out of a few bucks at the Recycling Center, due most likely in part to its quite undersized brain and the fact that it never remembers to wear pants with pockets.

After taking this sort of abuse for years, those pesky worms decided to take matters into their own hands (or should I say, segments) by redefining the image of the whole damn phyla. Swapping septa for shotguns, the worms became a fighting force of extraordinary magnitude. In short, the worms are ANGRY and ARMED...

This of course was chronicled nicely in Worms and the follow-up Worms: Reinforcements. Both were cult successes but never managed to breakthrough to the mainstream gaming public. Well I'm here to change all that, with the help of this year's sleeper hit, Worms 2.

For those of you unwise in the Way of the Worm , I'll try to explain the basic gameplay. Sort of a cross between the two classic games Lemmings and Artillery; the object is to keep your group of worms alive while destroying all enemy worms. This is done with a turn based system of strike/counterstrike set on a 'malleable' terrain. You take turns strategically moving your worms around, trying to get in position to kill and survive. Each worm has a certain number of hit points, and the winner is the team with the worm last standing. Basically, you blow everything up.

In order to blow things up, you have at your disposal a dizzying array of weaponry. The basics include bazookas, grenades, and guns, though this only scratches the surface. With over 30 unique methods of destruction, the fun never ends. Some of the more 'colorful' devices include exploding sheep, airborne napalm strikes, baseball bats, old women (mumbling about the price of tea), vicious bananas, and the hallowed 'concrete donkey.' (oh yes...it exists...)

This may sound a bit too simple for the hard core gamer, but rest assured this is no walk in the park. Employing wind effects ala Artillery, aiming takes great patience and skill. The plethora of weapons have different blast effects, making it imperative to fully understand how each weapon will react. A poorly trained Worm will most likely blow himself to itty bitty bits.

With super crisp SVGA graphics, Worms 2 is easy on the eyes. You can modify the graphical detail to suit your needs, though I found almost no slowdown whatsoever on a P 120 with 32 MB RAM. Slower systems hold up well; a pat on the back to Microprose for making a game that doesn't require a $2000 upgrade.

The sound kicks ass (or should I say, 'Dorsal'). With over a dozen sound banks, your Worms can be hollering at each other in a number of accents, from Angry Scots (blow 'em to haggis!) to James Brown impersonators (jump back, kiss myself). Explosions sound great as well, including the 'baa baa' of the pre-exploded sheep and the choir singing 'Hallelujah' before the Holy Hand Grenade serves (okay, I'm giving too much away now...).

One of the new features is the ability to hurl destruction from mid-air. Using the Ninja Rope, you can repel down the side of a hill, hover over an enemy, drop a sheep on his head, and climb to safety before the inevitable 'lamb chop suey.' Like a worm McGuyver without duct tape.

There are several ways to play the game. With 36 single player missions, you can get the hang of things before venturing into the true test of Worm Warfare by engaging in online multiplayer mayhem. Thankfully, developers Team 17 have their own servers for online gaming, cutting out the annoying middleman gaming zone like MPG or HEAT. At no extra cost, you simply log on to a Worms server, find a game and play against a drunk guy in Canada (or a drunk guy in America, if you live in Canada). This is really the highlight of the game. Since Worms 2 is turn-based, annoying lag isn't a huge issue. With LAN support and IP support, they came to the table prepared.

And what is any game these days without a level editor? Worms 2employs a simple and effective terrain editor - sort of a tailor made version of 'Paint.' You can also edit the weaponry and use both map and weapon data online. Am I gushing?

The only real problem with Worms 2 is the lack of depth. Your worms, while being quite impressive at learning how to bungee jump and lob grenades, don't get better with age. You can wipe out an entire enemy force with one particularly feisty worm, but he won't start the next round with more hit points, better weapons, etc. This would have added a layer of depth, much like the 'hero' system of the Warcraft II Expansion. According to one of the developers, an upcoming patch will include, among other things, a sort of 'degree' scenario, where you can actually train your worms to get better. How very kung-fu....and how very cool.

Worms. The downtrodden, the disgusting, the delinquents of the food chain. For years they've been pushed aside, swept under the carpet, and scraped off the boot. With Worms 2, those meaningless Annelids make a brave crawl forward. Join them in their quest for respect, ammunition, and dung. A highly recommended game, for any gamer.
Load Comments (0)