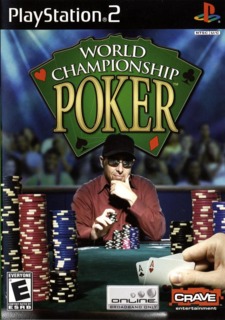 6.9
Fair Check out the review

Why any one would want to invest money in such an ugly, annoying game is beyond me.

User Rating: 4.8 | World Championship Poker PS2
By OutComeTheWolfs | Review Date: April 14, 2005
Lately our culture has been super saturated by a trendy little game called poker. With all this attention the game has become something of a newly adopted past time and as such should be treated with care when being adapted to any media, including games. Therefore one would think the creators of World Championship Poker would have put a lot more time, talent and effort into what could have been a great game. The premise is simple. Choose from one of 12 variations of poker and play your way through tournaments to become the ultimate poker champion. And it works pretty well. The different game types keep it fresh and new while the championship mode provides the challenge and a goal to reach for. The replay value is furthered by an online mode which works perfectly fine. So while the gameplay was done well enough, that's where the positive points end and a flood of negative problems begin. Case in point the absolutely horrendous graphics. While the look is decidedly current generation, it is quite possibly the most offensive use of polygons I have ever witnessed. The character models all look about the same with slight variations such as clothes hair and skin color, none of which help. They are, in a word, hideous. Its as though Gene Shallot and Janet Reno got busy and spawned a bevy of deformed creepy looking children. They animate horribly and twitch randomly in between turns. Some times you will even see their heads inflate for no apparent reason other than the fact that the developers didn't even care to fix the numerous graphical glitches. On top of this twistedly repulsive cast of characters are the ugly bland backgrounds. They remind me of the worst of what the first run of PS2 games had to offer. From time to time they are spruced up by, say a turning steamboat wheel, or a beach outside the window, but these things don't help. And as bad as the graphics are the sound is infinately worse. The braindead announcer repeats himself time and again and seems to have no idea whats going on. After even the most rudimentary hand he says things like "Now THATS what poker's all about!!" and other generic exclamitories that rarely fit the situation at hand. I swear when I hear his exasperated voice blab things like "We're going to see a flop!!" so excitedly as though it were an uncommon thing my stomach turns. Your opponents aren't a help either with their lethargic voices and annoyingly repetitious phrases. You will hear phrases in the exact same voice said the exact same way by all the characters at the table from time to time, which, honestley there is no excuse for. All of this is dragged down even further by the occasional abysmal background music, that is for the most part, mercifully absent. The bottom line is that you can play poker games of much higher quality online for free on your computer. So why any one would want to invest money in such an ugly, annoying game is beyond me.
Load Comments (0)