It's time to get your ass to Mars, again! Red Faction: Guerrilla Re-mars-tered, bring all the building destruction mayhem to the PS4, Xbox One, and PC in glorious 4K and a smooth frame-rate.

Red Faction: Guerrilla Remastered--or Re-mars-tered as it's officially dubbed--is about to be released, and now we're getting an early look at gameplay. The PS4, Xbox One, and PC remaster looks better and runs way smoother than the original 2009 release, and you can watch us play through the first mission above to see us destroy a base with explosives and do a whole lot of damage with a hammer.

The remaster primarily improves upon the original's visuals, as you can see in our PS4 Pro gameplay: there are new textures, lighting, shadow rendering, and post-processing. It also adds 4K support, and is way easier to play; the frame-rate is smooth and the game no longer struggles to keep up with the action.

Red Faction Guerrilla is known for its physics-friendly destructive gameplay, where you can use weapons, vehicles, and explosives to wreak havoc on your environment. Thanks to the remastered graphics and performance, this has never been more enjoyable. In GameSpot's original Red Faction Guerilla review, Randolph Ramsay gave the game an 8.5/10 and praised its fun action and long, challenging single-player campaign.

"You'll end up hearing that 'thunk' a lot in Red Faction: Guerrilla, but you'll never get tired of it because its deep, crunchy sound is tied so intrinsically to the satisfying visual destruction you see," he wrote of the game's iconic sledgehammer weapon.

"Guerrilla's gameplay is similar--many of the missions may feel like they're at the same, loud, all-out pace, but when devastation is this well presented, it's difficult not to get swept along by its primal energy. Red Faction: Guerrilla mixes a long and involving single-player campaign with a fun and satisfying online segment, with both adding up to a game that proves that a little chaos (or in this case, a lot) can be a positive thing." The remaster officially releases on July 3 and will cost $30.

Marvel's Guardians Of The Galaxy: First Look & Details | Play For All Interview 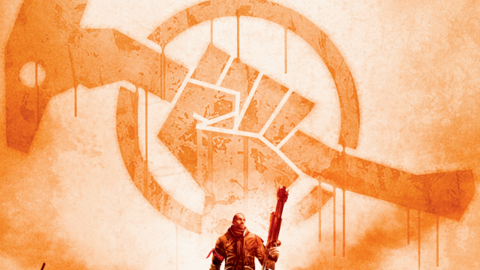 THQ brings the Geo-Modding hook of its original shooter series to the latest generation of gaming systems.