How Radical Heights Victories Compare With Fortnite And PUBG

We take a look at how PUBG's chicken dinner and Fortnite's Victory Royale stack up against the new battle royale game's celebration when you win a match.

By their very nature, victories in battle royale games are uncommon. Unless you're playing a team-based mode (where the odds are still stacked against you), it's you against 99 other people. So when you do manage to stick it out all the way to the end and take down that final opponent, you expect some kind of reward for all that hard work.

PUBG has its chicken dinner. Fortnite has its Victory Royale. And Radical Heights, the free new battle royale from the developer of LawBreakers, has its own unique spin on the victory celebration. As you might expect, given the game's sillier tone, it doesn't play things straight, cueing up the classic Joe Esposito song "You're the Best" from Karate Kid. In the video above, you can get a look at how each of the three games deals with the big moment.

Radical Heights launched this week in Early Access. It's rough in many ways, as you'd expect from a game that's still early in development, although some of the omissions--like the absence of playable female characters, who won't come until later--have proven more bothersome than others. The game does try to offer its own unique take on battle royale, such as letting you ride a bike and buy things from in-game vending machines (or store money in ATMs for future matches).

The specific roadmap for Radical Heights is not yet clear, though developer Boss Key says it plans to be in Early Access for about a year. It's available as a free download on Steam, although a Founder's Pack is available for sale that contains cosmetics and in-game currency. 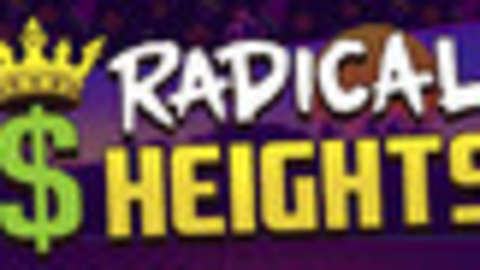