We saw an extended PC demo of co-op shooter GTFO at Gamescom 2018. Dave and Oscar talk about how the game emphasises teamwork and communication within its survival mechanics.

We've been trying out plenty of upcoming games at Gamescom 2018. In the video above, Dave talks to Oscar about his time with the PC demo of GTFO.

GTFO is a co-op shooter designed by the same folks behind Payday 2 and Ghost Recon Advanced Warfighter 2, and it puts a large emphasis on teamwork, communication, and quick reflexes. Both Dave and Oscar liken GTFO to Left 4 Dead, discussing how the game punishes you for playing solo. You don't want to tackle GTFO alone--it's meant to be played as a team.

In GTFO, you play as one of four prisoners who are under orders from a mysterious warden. Missions take place in sprawling underground catacombs filled with demonic monsters that range from motion-sensitive scouts to hulking brutes. At the start of each mission, you and your team will choose your primary and secondary firearm, a custom tool, and a melee weapon.

Choosing the right custom tool is paramount to surviving as a team in GTFO. Every tool is valuable, but there are too many to bring every one along, so you shouldn't double up unless you're absolutely certain you need to. Some custom tools play straightforward roles, like the radar that can detect heat signatures through closed doors, while others can be utilized in a variety of ways, like the glue gun that can slow down enemies or stick together a door before a horde of monsters breaks through.

GTFO rarely holds your hand, providing your team with a mission objective and little else. Environmental clues can reveal the way--such as reaching a sector by following worn-out signs or hacking a computer and scrolling through multiple files for a map--but you won't have any waypoint that tells your team where to go. Although the basic layout of each level will stay the same, minor tweaks to enemy placement, ammo drops, and clue locations change with each run.

The monsters in GTFO are also punishingly difficult, so running-and-gunning is a less-than-ideal strategy. Since most of the enemies' awareness is dependent on sound, sneaking through the environment and quietly picking off targets is your best bet. Being noticed by a Scout is a lot like being seen by a Witch in Left 4 Dead, as their demented moans attract a horde of seemingly never-ending enemies that's difficult for even the best teams to survive. Your team will die a lot in GTFO. The key is not getting frustrated and learning from each failure.

GTFO is scheduled to release exclusively on PC later this year. 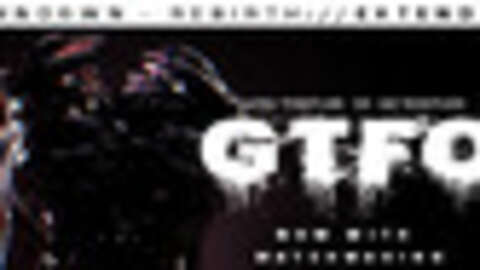 GTFO is a 4 player action/horror cooperative first-person shooter for hardcore gamers looking for a real challenge. Players get to play as a team of prisoners, forced to explore and extract valuable artifacts from a vast underground complex that has been overrun by terrifying creatures. Gather weapons, tools, and resources to help you survive - and work to unearth the answers about your past and how to escape.